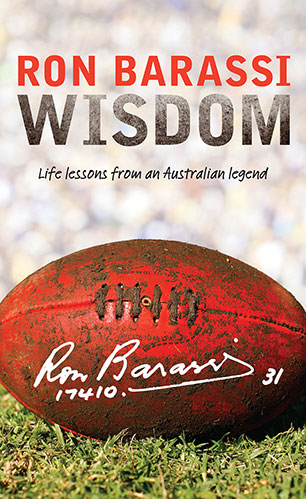 Words of wisdom from Ron Barassi providing motivation and inspiration to forge success and satisfaction in sport and in life.

Ron Barassi is an iconic figure in Australian sporting culture, with a record of personal and team success that is unrivalled. Beyond sport, he has become a greatly respected elder in our broader society.

In Wisdom, he shares with us 31 maxims and quotations that he has collected and which have been integral in forging that reputation. Ron reflects on each and explains their importance in delivering ideas, motivation and inspiration and how he applied them in sport and in life - words of wisdom, indeed. Containing beautiful illustrations from artist James Money, Wisdom is a book to come back to time and again.
More books by this author

Ronald Dale Barassi is a legend for many reasons; incredible player, revolutionary coach, enduring media personality. For more than 50 years he has been one of the most influential people in the game, and the shadow he casts is matched by few, if any.

Footballers are often branded heroes or villains according to their team colours, but Ron Barassi is loved and respected by all. He has truly become the father of the modern game, and will always be remembered as one of the all-time greats.

Born in 1974, James Money graduated from the Victorian College of the Arts in 1995.

His illustrations have graced various magazines, newspapers, books and other publications.

In 2003 James was awarded the Melbourne Savage Club Drawing Prize In 2010 his works were selected as finalists in the Archibald Prize, Doug Moran National Portrait Prize and Rick Amor Drawing Prize.