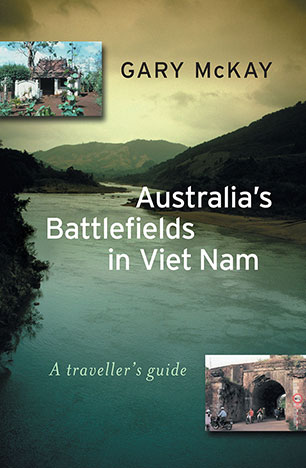 A traveller's guide to the Australian battlefields and cemeteries in Vietnam written for people actually holidaying in Vietnam as well as the wannabes who think they might go to Vietnam.

Being there 30 years on, standing on the fields of conflict, it all came rushing back. The good bits and the bad bits. But it left me with a feeling of comradeship and pride. I was glad that I made the journey.

In 1971 Gary McKay was an Australian platoon commander in what was then South Vietnam and was seriously wounded in one of Australia's major battles of the Vietnam War. In 2002 he returned to Vietnam and retraced the steps of the men who had gone before and after him, from 1965 to the end of the war in 1972, in what was Australia s longest lasting war.

Now, in this book, Gary McKay presents an essential guide to the battlefields in Vietnam for today's traveller. He provides practical tips on how to get to each site, what to look for and how to avoid the pitfalls of journeying in Vietnam. Along the way, he chronicles the major battles fought by the 1st Australian Task Force, accompanied by gripping narratives of the actions.

Illustrated with photos and maps, this book is a must for Australian travellers to Vietnam who want to learn more about the conflict that cost so many lives on both sides.
More books by this author

Gary McKay served as a rifle platoon commander in Viet Nam and was awarded the Military Cross for gallantry. His time in Viet Nam was the basis of his first book, the best-selling 'In Good Company: One Man's War in Vietnam'. He is also the author of 'Delta Four', 'Bullets, Beans and Bandages' (first published as 'Vietnam Fragments'), 'Sleeping with Your Ears Open' and co-author of 'Jungle Tracks', 'All Guts and No Glory' and 'Viet Nam Shots'. Gary lives in Jervis Bay and currently works as a freelance historian and non-fiction writer.

5 Phuoc Hai and Ap My An