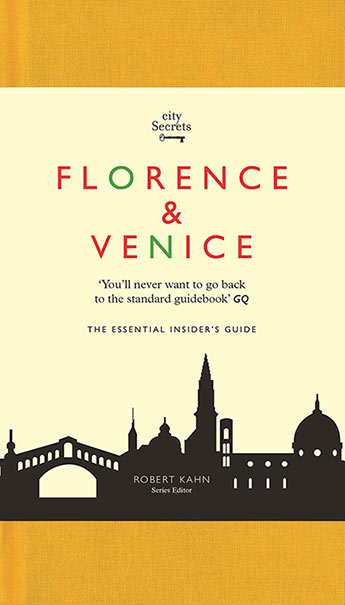 Writers, journalists, architects, chefs, artists, playwrights, travel writers and many others recommend their favorite little-known places in two of the most beautiful - and most travelled - Italian cities.

If a standard guidebook has never revealed the Italy you seek, let City Secrets show you the way. See the glorious art and architecture of Italy's villages and cities through the eyes of the people who know them best: an architect leads you through a hidden Florence passageway built for the Medici; a novelist points out the panoramic vistas that inspired St Francis; the most renowned of Italian cooks divulges her favourite Venetian eateries; and an artist directs you to the courtyard of a Renaissance convent, where you will ring for access to the frescoes - and a miraculous handprint - that lie within.

Clothbound, elegant, and pocket-sized, this book features a subtle non-guidebook design and detailed maps. It is the ideal supplement to a more basic travel guide, or a perfect gift for the sophisticated traveller who is tired of the picture postcard recommendations and wants to try something unique.
More books by this author

Robert Kahn is founding principal of Robert Kahn Architect, based in New York. His work has been featured in Architectural Digest, Metropolitan Home, and the New York Times, among many other publications. He is also the creator and series editor of the acclaimed City Secrets series, which has been reviewed in numerous publications, including Vanity Fair, the New York Times, and New York Magazine. He is a Fellow of the American Academy in Rome.