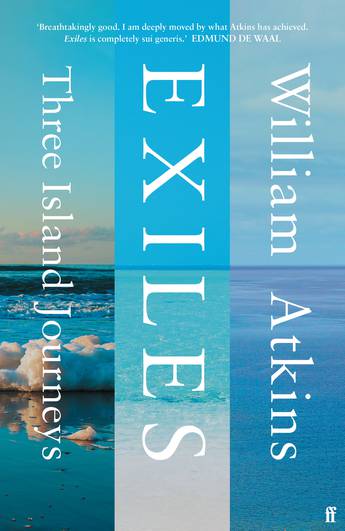 A luminous exploration of exile - the people who have experienced it, and the places they inhabit - from the award-winning travel writer and author of The Immeasurable World and The Moor.

'One of the best makers of sentences around.' - OLIVIA LAING
'An erudite writer with a wonderful wit and gaze'. - JOY WILLIAMS

This is the story of three unheralded nineteenth-century dissidents, whose lives were profoundly shaped by the winds of empire, nationalism and autocracy that continue to blow strongly today: Louise Michel, a leader of the radical socialist government known as the Paris Commune; Dinuzulu kaCetshwayo, an enemy of British colonialism in Zululand; and Lev Shternberg, a militant campaigner against Russian tsarism.

In Exiles, William Atkins travels to their islands of banishment - Michel's New Caledonia in the South Pacific, Dinuzulu's St Helena in the South Atlantic, and Shternberg's Sakhalin off the Siberian coast - in a bid to understand how exile shaped them and the people among whom they were exiled. In doing so he illuminates the solidarities that emerged between the exiled subject, on the one hand, and the colonised subject, on the other. Rendering these figures and the places they were forced to occupy in shimmering detail, Atkins reveals deeply human truths about displacement, colonialism and what it means to have and to lose a home.

Occupying the fertile zone where history, biography and travel writing meet, Exiles is a masterpiece of imaginative empathy.

'A brilliant book . . . [Atkins has] done Dinuzulu's exile an immense service by bringing it into view in the most thoughtful and engaged way.' - PROFESSOR HLONIPHA MOKOENA, UNIVERSITY OF WITWATERSRAND, SOUTH AFRICA

William Atkins' first book, The Moor, was shortlisted for the Thwaites Wainwright Prize, and his second, The Immeasurable World, was published by Faber in June 2018. He works as an editor and his journalism has appeared in the Guardian and Granta. In 2016 he was a recipient of the British Library Eccles Prize. He lives in Suffolk.