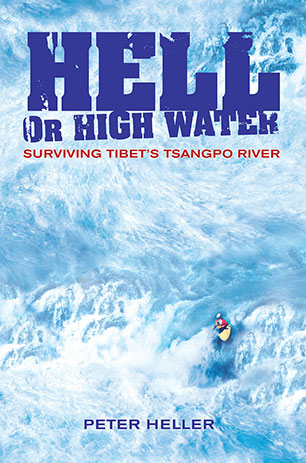 The great adventure tales of man against nature have already been told the race to the South Pole; the first ascent of Everest; Shackleton's escape from Antarctica. Each continent has yielded up its treasure, and there are few such epic challenges left. But deep in the Tsangpo Gorge a team of extreme kayakers found their Everest.

The Tsangpo Gorge cuts through the eastern end of the Himalayas to form the deepest, most remote river canyon on earth. Three times deeper than the Grand Canyon, hemmed in by 7500 metre plus peaks, and sacred to Tibetan Buddhists, the Tsangpo is revered as the last remaining extreme adventure challenge. An attempt in 1998 failed, ending in the death of one of the team. In 2002, despite the dangers, seven of the world's top expeditionary kayakers, including New Zealander Mike Abbott, paddled against the furious currents of Tibet's Tsangpo River and into the throat of the gorge.

Led by filmmaker Scott Lindgren, the kayakers launched a grand, 19th century-style river expedition on a scale not seen since Lewis and Clark. Supported by an international team of eighty including Nepali sherpas, a Buddhist lama, a great Tibetan explorer, and author and adventurer Peter Heller they were prepared to go fifty days through the Himalayan winter without re-supply. It would become a thirty-seven day epic taking the paddlers through the most dangerous sustained white water ever and into the heart of the mythical Shangri-la, an isolated world of dense forests, ancient prayer caves and golden panthers. Along the way they were forced to traverse a terrifyingly steep mountain pass of snow and ice, kayaks slung across their backs; negotiate with corrupt officials; stare down violent, mutinous porters; and confront their own inner demons and fears.

Hell or High Water takes you on a heart-stopping, awe-inspiring journey into a near-inaccessible world of death-defying white water and international river cowboys. A place so remote, so veiled in mystery and steeped with religious significance that one of its earliest explorers called it the very end of the earth'.
More books by this author

Peter Heller, an extreme kayaker himself, was on the expedition's ground support team. He is an author (Set Free in China: Sojourns on the Edge) and a contributor to National Geographic Adventure, Harper's, Men's Journal and National Public Radio USA's All Things Considered.

Seven: Doug's Ledges to the Spur