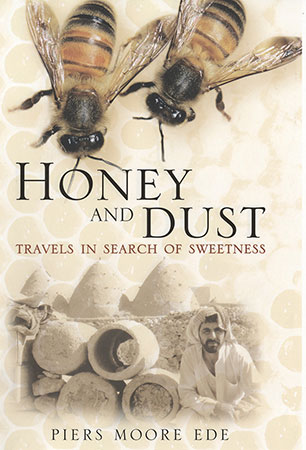 A celebration of honey and the regenerative powers of nature

Seriously injured after a hit and run, Piers Moore Ede went to work on an organic farm in Italy. There he met a beekeeper, Gunter, who showed him, for the first time, the wonders and magic of the beehive. Inspired by this, and by Gunter's dream to 'taste all the honeys in the world', he decided to embark upon his own quest, a search for honey.

His search would take him to the Lebanon, where he tasted honey from high altitude marijuana nectar; to the Syrian desert where bees are still kept in ancient clay hives as they have been for thousands of years; to Nepal where he hunts vast honeycombs, yielding a mildly narcotic honey, from Himalayan cliffs. Finally to Sri Lanka, where he meets the Veddhas, the indigenous people of the island, who lead him on a jungle honey hunt. Honey and Dust is about the world's oldest and purest food. But it also a personal quest of healing, an attempt to regain a sense of place in the world. Meditative, and keenly observant, it is a book about the joy of being alive, and of the regenerative powers of wild nature.
More books by this author

Piers Moore Ede was educated at Winchester College, Exeter, and the University of Santa Cruz, California. Since then he has worked as a farmer, boat driver, surfing instructor, poetry teacher, and baker. He has travelled widely and contributed to many literary, travel and environmental publications including: the Telegraph, the Times Literary Supplement, Ecologist, Traveller and Earth Island Journal.