Boldly going where Captain Cook has gone before 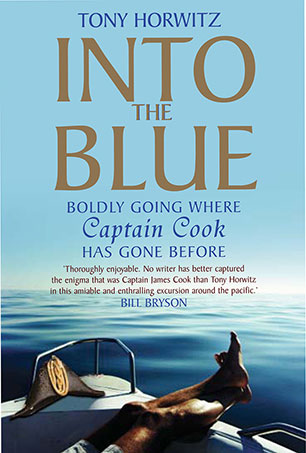 By turns harrowing and hilarious, insightful and entertaining, Into the Blue retraces the great voyages of Captain James Cook, the British farmboy who drew the map of the modern world.

'One of the most captivating books on Captain Cook I have yet read Horwitz's eye for detail and ear for dialogue are Brysonesque indeed the master had better look to his own laurels.' Tim Bowden, Good Reading

'There is an irresistible momentum to Horwitz's epic journey You will seldom encounter travel writing better than this, and it is no surprise that Into the Blue has rocketed up the best-seller lists.' The Sydney Morning Herald

'What a ripping yarn is Into the Blue, all rum, sodomy and the lash. It's also a complex and comprehensive salute to a man who rose from humble origins to become leader of men Compelling, and still a relevant tale, Horwitz has done the good (and bad) captain proud.' The New Zealand Herald

Tony Horwitz follows in Cook's footsteps to uncover his legacy, and along the way has many revealing and often amusing adventures of his own. By turns harrowing and hilarious, insightful and entertaining, Into the Blue brings to life a man whose voyages have left an indelible mark on the world as we know it.
More books by this author

Tony Horwitz is the bestselling author of Confederates in the Attic, Baghdad Without a Map and One for the Road. He has lived overseas with his Australian wife for a decade and filed dispatches from forty countries, often as a war correspondent covering conflicts in the Persian Gulf, Sudan, Lebanon, Bosnia, and Northern Ireland. Horwitz has worked as a journalist for The Wall Street Journal and as a staff writer for The New Yorker, and was awarded the Pulitzer Prize in Journalism in 1995. He currently lives with his wife and son in Virginia.