Land of a Thousand Eyes

The subtle pleasures of everyday life in Myanmar 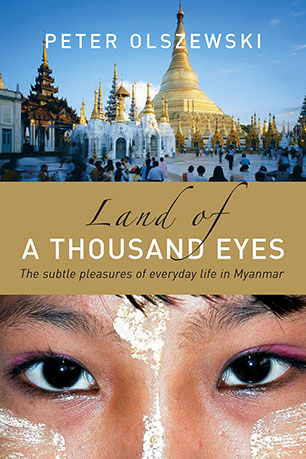 A vivid insider's account of Myanmar, one of the most inaccessible and mysterious countries in our region.

A trio of colourfully dressed women tottered and teetered delicately

through the water, holding hands, laughing. They were jewels in a sea of

shit, standing out against the muddied monochrome of the monsoon's

detritus, and they represented the admirable qualities of the Myanmar that

I had come to love: the ability not only to make do, but to giggle and

pursue life with joie de vivre, despite the deprivations dished out by the

elements or by the military masters.'

As a former rock magazine editor, editor of Australian Playboy, creator of

Olszewski has lived an interesting and varied life. But all this seemed

for the main English-language newspaper, the Myanmar Times. Myanmar is a

country known mostly for its repressive military regime, so the exciting

and vivid world he found there was not the one he expected. He fell in love

with the country, the people and one woman in particular.

secretive and isolated countries.
More books by this author

Peter Olszewski has had a long career in the Australian print media as a journalist, columnist and editor. He has also worked as a radio broadcaster for English and US networks. In recent years he has worked as a freelancer, writing for many major newspapers and magazines, has been a university lecturer in journalism and communications, and most recently a journalism trainer in Myanmar. He currently lives in Queensland and doesn't have a cat.

Peter is also the author of A Dozen Dopey Yarns: Tales from the Pot Prohibition (JJ McRoach) and A Salute to the Humble Yabby.