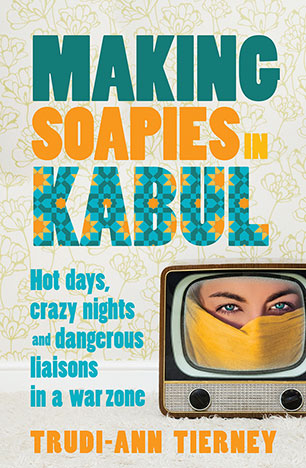 The hugely funny and nail-bitingly dramatic account of how a talented Australian TV executive found herself working on Afghanistan's best-loved soap.

On an impulse, Trudi-Ann Tierney, Sydney producer and former actress, goes to Kabul to manage a bar. She quickly falls into the local TV industry, where she becomes responsible for producing a highly popular soapie.

Trudi's staff are hugely inexperienced. They include Habib, the Pashto poet who wants to insert allegorical scenes involving fighting ants into the scripts; Rashid, the Dari manager, who spends all day surreptitiously watching uncensored Hindi music videos; and the Pakistani actresses who cross the border to Jalalabad ('Jallywood') to perform roles that no Afghan actresses can take on without bringing shame to their families.

Trudi lives among the expat community - the media, the burnt-out army types now working as security contractors, the 'Do-Gooders', the diplomats - in dubious guest houses like The Dirty Diana. This is 'Ka-bubble', where the reckless encounters with each other, with alcohol and of course with recreational drugs are as dangerous as the city's streets.

Here are crazy people living crazy lives, and locals trying to survive as best they can against the backdrop of war.

Trudi-Ann Tierney is a Sydney-based writer and producer for television who spent three and a half years as the head of drama for a broadcaster in Afghanistan. Her production company is currently developing a drama serial for Papua New Guinea. This is her first book.