Wanderings in Europe between the Wars 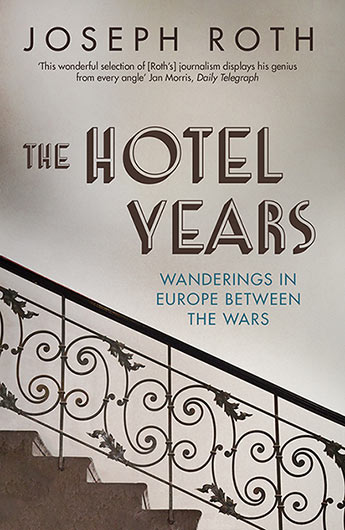 From Joseph Roth, author of The Radetzky March, a new selection of writings about Europe between the wars, by turns poignant, witty and unsettling.

The hotel that I love like a fatherland is situated in one of the great port cities of Europe, and the heavy gold Antiqua letters in which its banal name is spelled out shining across the roofs of the gently banked houses are in my eye metal flags, metal bannerets that instead of fluttering shine out their greeting.

In the 1920s and 30s, Joseph Roth travelled extensively in Europe, leading a peripatetic life living in hotels and writing about the towns through which he passed. Incisive, nostalgic, curious and sharply observed - and collected together here for the first time - his pieces paint a picture of a continent racked by change yet clinging to tradition. From the 'compulsive' exercise regime of the Albanian army, the rickety industry of the new oil capital of Galicia, and 'split and scalped' houses of Tirana forced into modernity, to the individual and idiosyncratic characters that Roth encounters in his hotel stays, these tender and quietly dazzling vignettes form a series of literary postcards written from a bygone world, creeping towards world war.
More books by this author

JOSEPH ROTH (1894-1939) was the great elegist of the cosmopolitan, tolerant and doomed Central European culture that flourished in the dying days of the Austro-Hungarian Empire. Born into a Jewish family in Galicia, on the eastern edge of the empire, he was a prolific political journalist and novelist. On Hitler's assumption of power, he was obliged to leave Germany for Paris, where he died in poverty a few years later. His books include What I Saw, Job, The White Cities, The String of Pearls, The Emperor's Tomb and The Radetzky March, all published by Granta Books.MICHAEL HOFMANN is the highly acclaimed translator of Joseph Roth, Wolfgang Koeppen, Kafka and Brecht, and the author of several books of poems and book of criticism. He has translated nine previous books by Joseph Roth. He teaches at the University of Florida in Gainesville.