The Ghan, the Khyber, the globe 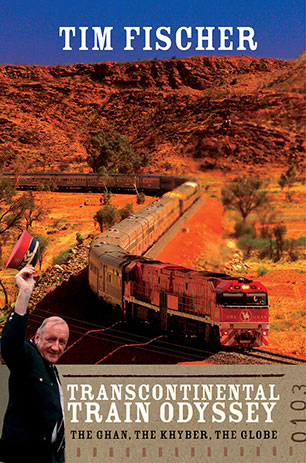 Tim Fischer's very personal guide to the great transcontinental railways of the world.

'A fascinating view of railways throughout the world by an Australian railway do-er.' - Mike Mohan, formerly of US Railroader, Southern Pacific Railways and now ARG, Perth

Join Tim Fischer, former deputy prime minister of Australia and one of the country's best-known (and most energetic) train enthusiasts, on an entertaining and informative journey to the great railways of the world.

From the early days of train travel to the heady international race to develop new railways to the inaugural journey of Australia's new Ghan, Tim explores the successes and the disasters of a mode of transport that still captures the imagination today.

Here are tales from Tim's many hundreds of train trips around the world, colourful anecdotes about the characters he's met and the far-flung places he's visited, and descriptions of his twelve greatest stations in the world - as well as enough rail history and technical information to satisfy the most ardent trainspotter.
More books by this author

Tim Fischer is the much loved and widely respected Boy from Boree Creek, former deputy prime minister of Australia and leader of the National Party, and committed rural Australian. He is also a serious train enthusiast who argues we need rail now and into the future more than ever before.

16 Great Britain: the birthplace of rail 71