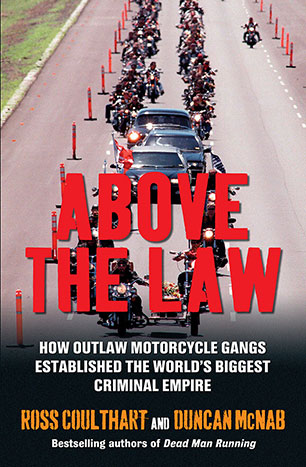 Following the astonishing revelations in the bestselling Dead Man Running, comes this forensic examination of the global future of organised crime - now being operated on a massive scale by outlaw motorcycle gangs.

One of the astonishing revelations in the bestselling expose Dead Man Running, by Ross Coulthard and Duncan McNab, was the difficulty faced by the Australian police in tackling the burgeoning crime empire that outlaw motorcycle gangs were developing in our country. The news just gets worse - here in Australia and wherever else these biker gangs flourish.

Above The Law takes a hard and chilling look at the global future of organised crime, and reveals that the world's most successful criminal empire is now being operated on a massive scale by outlaw motorcycle gangs - an empire that is growing in power, reach and ruthlessness by the day.

Far surpassing the threats posed by the Mafia, Russian syndicates, Chinese Triads and Japanese Yakuza, outlaw motorcycle gangs are now being acknowledged as the greatest current organised crime threat. Their international empire is both sophisticated and bloody and brutal. It is also both strategic and opportunistic - where they cannot dominate, they broker alliances.

Above the Law investigates how it all started: the turf wars that were fought, the deals that were done, and how the sea of cash that was earned is now being legitimised. It also reveals how law enforcement at an international level is losing the battle against the gangs. Using exclusive insider sources on four continents, this is the first contemporary account of one of the biggest criminal stories of our time. Read it and be afraid.
More books by this author