Congratulations You Have Just Met the ICF

They Have Style, They Have Violence... The Intercity Firm Are All Your Worst Nightmares Come True 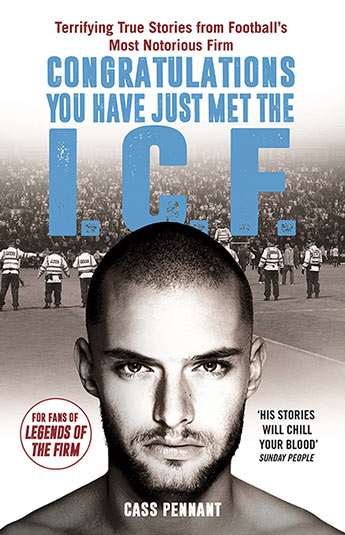 A terrifying and thrilling account of life in the country's most notorious hooligan gang.

The InterCity Firm... hard, terrifyingly vicious, brilliantly organised, tremendously feared and highly fashionable. They were the most notorious firm of Seventies and Eighties football hooligans this country has ever seen. In this new edition, all the faces of the West Ham firm reveal their memories and thoughts about the violence, the battles, the campaigns, the run-ins with the authorities, and all that came with it.

Bestselling author Cass Pennant was one of the best-known figures of the I.C.F. He has used his unique position as a West Ham insider to bring together these first-hand accounts of the men who were at the eye of the storm, both on and off the terraces. These tales from the terraces range from the inflamed East End rivalry with Millwall, to the shed-end battles with Chelsea, from aggravation at Anfield's Kop to the disaster in Heysel.

Congratulations, you are just about to meet the I.C.F...
More books by this author