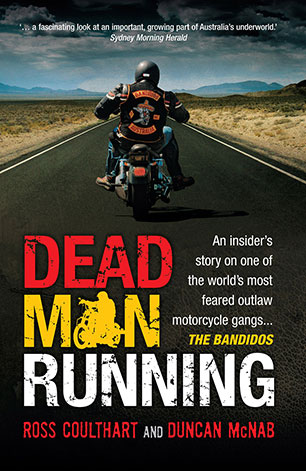 A true and chilling first hand account of the criminal involvement of the feared Bandidos gang - the most powerful and influential crime group currently operating in Australia and North America today - and how one man broke their code and turned informant.

They'll come after me. I really am a dead man running.

'We are the people our parents warned us about' is the motto of the Bandidos, one of the world's most feared outlaw motorcycle gangs. For ten years, Steve Utah was a Bandidos insider. He arranged the security of their clubhouses and electronic surveillance and counter surveillance. He 'cooked' ecstasy and ice for them. He was at meetings where interstate and overseas drug and weapons smuggling was planned. He saw stolen military weapons, including deadly rocket launchers, being sold. He witnessed vicious beatings, helped dump corpses.He saw men executed in front of him.

It all became too much and, in an attempt to regain control of his life, Utah resorted to the unthinkable: he rolled over to the Federal Police and told them all he knew about the Bandidos. He had intimate knowledge of every facet of the Bandidos' business in Australia and many aspects of their activities in North America. He literally knew where the bodies were buried.

This shocking, unflinching, tragic story is Steve Utah's confession. He knows he is a dead man running - that inevitably the Bandido code will be honoured and he will be silenced. But not before Utah gets his chance to wake Australians to the looming threat in their midst - the relentless rise of sophisticated organised crime networks inside outlaw motorcycle gangs and the apparent inability of the Police and legal system to deal with it.

'Timely. . . A good read, full of accounts of murder, mayhem and dirty dealing. The book is a fascinating look at an important, growing part of Australia's underworld.' - Sydney Morning Herald
More books by this author

Ross Coulthart is a Walkley Award winning journalist. Duncan McNab is the author of The Usual Suspect - The Life of Abe Saffron (Pan Macmillan 2005) and The Dodger - Inside the World of Roger Rogerson (Pan Macmillan 2006). He is also a former policeman and private investigator.