My life as an execution witness in America's most infamous prison 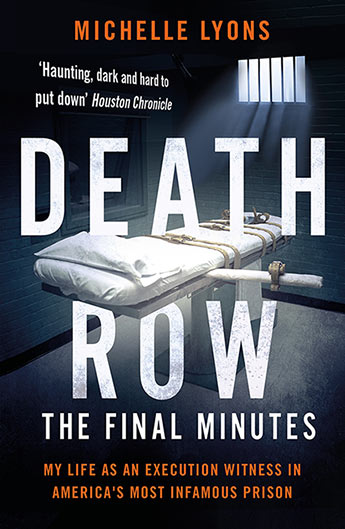 The remarkable, unbelievable and provocative story of one woman's experiences working on death row in Huntsville, Texas.

As a reporter and then spokesperson for the Texas Department of Criminal Justice, Michelle was a frequent visitor to Huntsville's Walls Unit, where she recorded the final moments of death row inmates' lives before they were put to death by the state.

Michelle witnessed some of the most notorious criminals, including serial killers, child murderers and rapists, speak their last words on earth, while a cocktail of lethal drugs surged through their veins.

Misgivings began to set in as the execution numbers mounted. She came to know and like some of the condemned people she saw die, and began to query the seemingly arbitrary nature of the death penalty. Do executions actually make victims of us all?

'Haunting, dark and hard to put down' Houston Chronicle

'A portrait of what it's like to be surrounded by death...
a memoir of perseverance in the face of routine tragedy'
The Daily Beast
More books by this author

Michelle Lyons was a prison reporter before becoming a spokesperson for the Texas Department of Criminal Justice. In both roles, she witnessed the executions of some of the most infamous inmates of Texas death row. In 12 years, she saw nearly 300 inmates die by lethal injection, and this is the story of how those executions took their toll. The thoughts of Larry Fitzgerald, Michelle's dear friend and former colleague, also form part of her compelling narrative.