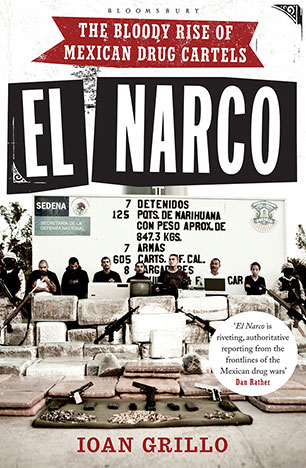 The gripping account of the out-of-control drug wars that have brought chaos to Mexico.


'War' is no exaggeration in discussing the bloodshed that has terrorised Mexico in the past decades. As rival cartels battle for control of a billion-dollar drug trade, the body count - 23,000 dead in five years - and sheer horror beggar the imagination of journalistic witnesses. Cartel gunmen have attacked schools and rehabilitation centers, and murdered the entire families of those who defy them. Reformers and law enforcement officials have been gunned down within hours of taking office. Headless corpses are dumped on streets to intimidate rivals, and severed heads are rolled onto dancefloors as messages to would-be opponents. And the war is creeping northward, towards the United States.
El Narco is the story of the ultraviolent criminal organisations that have turned huge areas of Mexico into a combat zone. It is a piercing portrait of a drug trade that turns ordinary men into mass murderers, as well as a diagnosis of what drives the cartels and what gives them such power. Veteran Mexico correspondent Ioan Grillo traces the gangs from their origins as smugglers to their present status as criminal empires. The narco cartels are a threat to the Mexican government - and their violence has now reached as far as North Carolina. El Narco is required reading for anyone concerned about one of the most important news stories of the decade.

Educated in England at the University of Kent, Canterbury, Ioan Grillo has covered Mexico since 2001 for top newspapers, magazines and TV stations in the US and UK. He reports for Time Magazine as well as producing presentations for stations including PBS, ABC and Channel 4. He regularly appears on radio and TV, commenting on Mexican crime and other issues.