The adventures of Arthur Delaney and The Kangaroo Gang 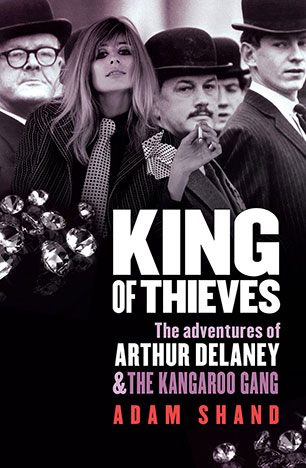 The story of the most spectacularly successful shoplifting gang in history, who plundered stores in England and Europe in the 1960s and 1970s - the Kangaroo Gang, led by a master thief 'King' Arthur Delaney.

'A highly organised gang of Australian shoplifters is at work in Britain stealing goods worth hundreds of thousands of pounds a year. New members of the gang are flown from Australia whenever the organisers want replacements.'

From the mid 1960s, a brazen band of Australian thieves ran riot in London for more than a decade, pulling off the most daring heists Scotland Yard had ever seen. They were tagged by the Press as the Kangaroo Gang.

The gang, led by the charismatic 'King' Arthur Delaney, targeted the plush emporia of Knightsbridge and the fine jewellers of Mayfair. But the King didn't stop there, criss-crossing Europe to lay siege to the luxury retailers of Paris, Brussels, Rome and beyond.

The Kangaroo Gang operated at a time before closed-circuit television cameras. They elevated shoplifting to an art form practised without guns or violence. The King always found a way to simply 'disappear' with the loot.

This is also a love story between the King and his 'Queen' Alexis, who tried to tame the greatest of travelling thieves. The King's 30-year criminal odyssey culminated in the biggest job of his career - six million pounds worth of precious gems from Asprey of London, jeweller to the Queen - in broad daylight.

King of Thieves is a true story, soon to be made into a major feature film.

Adam Shand is the bestselling author of Big Shots, the inside story of Melbourne's gangland wars. He has previously been a journalist on The Bulletin and on the 'Sunday' program. He now works for News Ltd and the Triple M radio network as an investigative reporter.
More books by this author

Adam Shand is the author of Big Shots and King of Thieves (A+U 2009). He has previously been a journalist on 'The Bulletin' and on the Nine Network's 'Sunday' program.