The Final Word on My War with The Krays 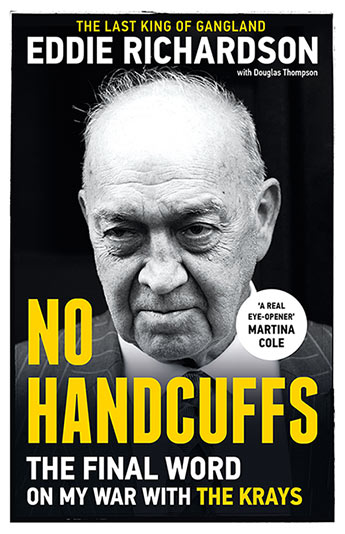 'We couldn't, we wouldn't, let anyone take a liberty. That was never an option at that time' - Eddie Richardson.

Eddie Richardson is the last brand-name gangster. Say the name and the world of violent criminality grabs you by the throat.

The Richardson brothers, Eddie and Charlie, and their infamous 'Torture Gang', made money while their rivals Ronnie and Reggie Kray made fatal mischief. They fought each other, but now, in 2018, Eddie Richardson says: 'They tell me blood is thicker than water, but with Charlie it wasn't so. He was evil.'

With his brother dead, Eddie Richardson feels free to detail the story of a vicious family feud that provoked extravagant acrimony. No Handcuffs unravels the mysteries of decades of crime and political incident. The story of a turbulent era, it rivals the most imaginative fiction in its portrayal of gangland life with all its chanciness and rawness and careless disregard for any obstacle on the way to its target, the big money.

In an inspired collaboration with bestselling author Douglas Thompson, the mature Eddie Richardson is given a voice to reflect on his journey from the scrapyards of South London to the glitz and glamour of the West End nightclubs, to the flesh and tease of Soho, down Downing Street and through the door of Number 10 to the perils of espionage and international intrigue, and his elevation to demigod status in hard-men territory - and finally as a high-security inmate at Her Majesty's pleasure, but with a personal fridge kept well-stocked with gourmet food.

No Handcuffs resonates today for, if anything, greed and corruption are more perverse, more rampant. As Eddie Richardson points out: 'We wrote the handbook for them.'
More books by this author

Eddie Richardson: former gangster and enforcer, convicted felon, successful artist and, now, motivational speaker - and the man who knows where the bodies are buried.