Shantaram to the Bangkok Hilton, The World's Most Wanted Australians 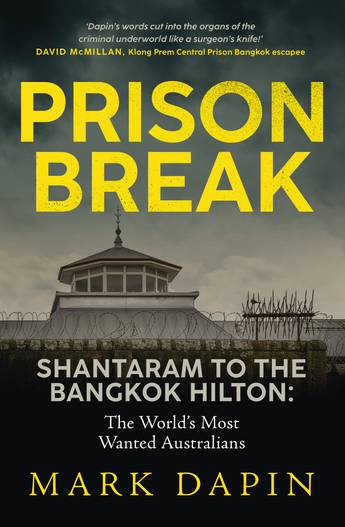 The true stories behind the myths of Gregory Roberts, John Killick and Australia's most wanted men.

'Dapin's words cut into the organs of the criminal underworld like a surgeon's knife!' DAVID McMILLAN, Klong Prem Central Prison Bangkok escapee
'Mark Dapin has built a rapport with some of Australia's most serious criminals. It is a rapport that gives him an edge over other authors that cannot be replicated.'BERNIE MATTHEWS, Long Bay Correctional Centre escapee

On a Sunday afternoon in 1980, armed robber Gregory David Roberts abseiled down the front wall of a maximum-security prison in broad daylight. He spent a decade on the run in West Asia before writing his own legend in the bestselling semi-autobiographical novel, Shantaram.

In the late nineties, Melbourne-based drug dealer and gangster David McMillan became the only Australian ever to escape from the so-called 'Bangkok Hilton' in Thailand.

And in 1999, armed robber John Killick was airlifted out of a maximum-security prison by his beautiful Russian-born girlfriend - after she hijacked a helicopter with a machine gun.

With unprecedented access to ex-prisoners, prison officers and police, as well as ASIO files and witnesses, Mark Dapin brings to life a hidden criminal world of prison brutality, courage and legend. Prison Break tells the real story behind Australia's most audacious prison escapes and proves that sometimes the truth is even more compelling than the myth.
More books by this author

Mark Dapin is a journalist, screenwriter and author whose books include Public Enemies, King of the Cross, Spirit House, R&R, The Nasho's War, Strange Country and Public Enemies .