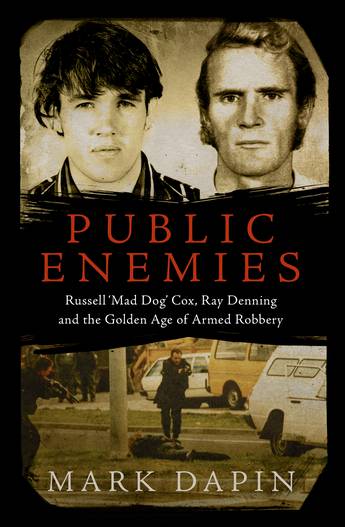 The gripping and revealing inside story of Australia's most notorious armed robbers.

In the Australia of the 1960s, 70s and 80s, armed robbers were the top of the criminal food chain. Their dash and violence were celebrated, and men like Russell 'Mad Dog' Cox and Ray Denning were household names long before Underbelly established Melbourne's gangland thugs as celebrities.

Cox and Denning were once Australian Public Enemies Number One and Two. Both were handsome, charismatic bandits who refused to bow to authority. Both were classified as 'intractable' in prison, and both escaped. Cox was the only man to escape from Katingal, Australia's only 'escape-proof' jail. Soon after he broke out, he tried to break in again and rescue his mates.

Their story is one of violence and crime, but it is also about the unimaginable horrors that young boys faced when condemned to 'institutions' in the 1960s, and the terrible conditions in Australian jails in the 70s and 80s. These were the hells where a whole generation of armed robbers was forged.

Mark Dapin brings his brilliant research skills and distinctive, powerful narrative style to a book that explores the life of these infamous yet respected public enemies and the criminal world they inhabited. From armed robberies, shootings and bashings to prison floggings and jail breaks, this is the gritty, page-turning reality behind the headlines.
More books by this author

Mark Dapin is a journalist, screenwriter and author whose books include King of the Cross, Spirit House, R&R, The Nasho's War and Strange Country.