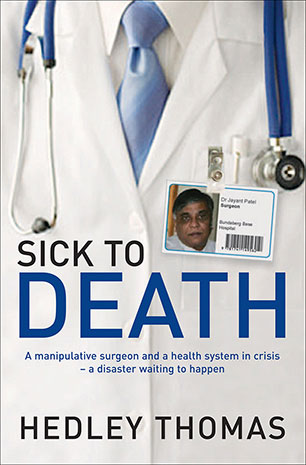 An explosive account of Dr Jayant Patel's gross medical negligence and his legacy of lost lives, infection and mutilation.

They called him Dr Death. A 15-year-old boy's leg had to be amputated as a result of his poor judgement. He botched a procedure on a young man, leaving him impotent and urinating through his rectum - and with a 30cm surgical clamp embedded in his abdomen. Undeterred by the atrocities he was causing, Dr Death continued to deceive the patients who trusted him to fix their pain. At least 17 people in his care did not survive.

Dr Jayant Patel's reign at Bundaberg Base Hospital lasted two years. A life-threatening combination of the doctor's manipulative personality and a culture of concealment in politics and medicine meant that the surgeon's incompetence went unchallenged by Queensland authorities, despite the fact that Dr Patel had previously been banned from surgical practice in the United States.

But a courageous nurse blew the whistle, taking the appalling story of a sick health system to a leading journalist and a state parliamentarian. Their combined efforts forced two powerful enquiries. This is a true story of deceit, tragedy and heroism, one that forces us to question our very faith in this country's medical system.

Hedley Thomas won a 2005 Walkley Award for unveiling the truth about Dr Patel. Toni Hoffman's efforts have been lauded on many levels including a Local Hero Award in the 2006 Australian of the Year honours.
More books by this author

Hedley Thomas is a senior writer for The Australian. He excels in writing intensive investigative pieces, lengthy profiles and news articles. He broke the shocking story about Dr Jayant Patel's negligence at the Bundaberg Base Hospital. Hedley received his third Walkley award for this expose and received a special accolade, the Sir Keith Murdoch Award, from News Corporation chairman Rupert Murdoch as well as the 2005 Queensland Premier's Literary Awards for work advancing public debate. Hedley's first Walkley was awarded in 1999 (with colleague Paul Whittaker) when he exposed the Net Bet affair, and his second was in 2003 for his feature article on fallen chief magistrate Di Fingleton. Hedley has had extensive international experience that has ranged from reporting on the fall of the Berlin Wall, the Romanian revolution and the first Gulf War, to six years spent with the South China Morning Post as a senior reporter, features writer and deputy features editor.