Talking with Psychopaths and Savages: Mass Murderers and Spree Killers 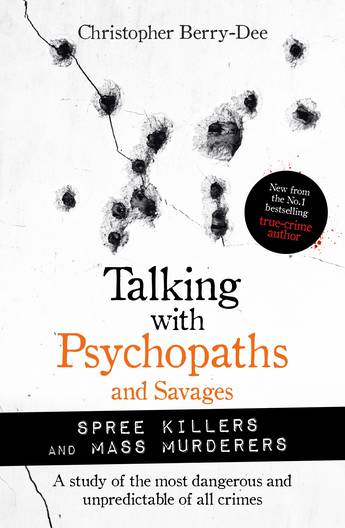 A natural subject for the UK's bestselling true-crime author: a study of people who randomly kill large numbers of others (spree killers), or who set out to do so in specific places or situations (mass killers). Because of the ease of obtaining firearms in the USA, many of these, inevitably, are American, but there have been other recent examples in New Zealand and Norway, while three major mass shootings took place in the UK at Hungerford in 1987 (17 dead, including the killer), Dunblane in 1996 (18, including the killer), and in Cumbria in 2010 (13, including the killer).

As such killings become more frequent, it is easy to blame them on the ready availability of firearms and weak or non-existent background checks, even though many countries, including the UK, have extremely robust firearms legislation. What is more difficult to establish, however, is the motivation behind such killings: some are occasioned by grievance, real or imagined, while others have their origins in a sense of failure or feelings of inadequacy. Other killers, however, seem to be driven by a desire for power over their fellow humans, often coupled with an overriding contempt for the lives of others.

In search of answers to the questions raised, Christopher Berry-Dee offers case studies in some of the most infamous mass killings of the past fifty years, from school massacres to workplace killings, hate crimes to familicides. In doing so he demonstrates, chillingly, that such murders are almost impossible to predict, and therefore almost impossible to prevent.
More books by this author

A leading writer on crime and the pathology of criminals, Christopher Berry-Dee's recent books include his two earlier titles Talking With Psychopaths and Savages: A journey into the evil mind, the UK's bestselling true-crime title of 2017, and Talking With Psychopaths and Savages: Beyond Evil, a bestseller following its publication in autumn 2019. He is the country's No. 1 true-crime author.