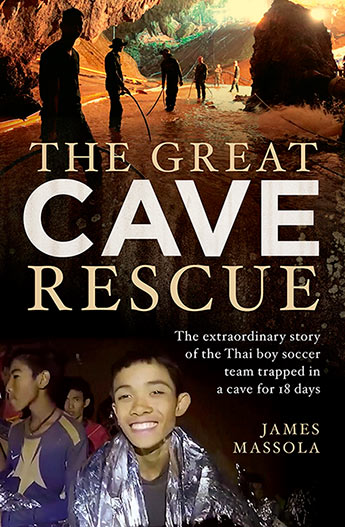 The complete story of the miraculous rescue of the Wild Boars soccer team boys and their coach in Tham Luang cave in northern Thailand in July 2018.

Keen to go exploring after soccer practice, the boys of the Wild Boars soccer team ignored the sign at the cave entrance warning visitors not to enter during the monsoon season. What followed was a high-stakes international mission that very nearly didn't succeed.

The ordeal riveted millions around the world. First came the awful news that twelve Thai boys, aged 11 to 17, and their young coach were missing. Then the flickering video of the huddle of anxious and hungry boys found by a pair of British divers nine days later. But the most difficult part was yet to come. Monsoon rains had raised the water level in the cave system, and the boys were trapped in an air pocket, surrounded by rising muddy water, over two kilometres from the cave entrance. None of them knew how to dive.

Expert British, Australian, American, Chinese and other international divers joined the Thai Navy SEALs and hundreds of local volunteers to mount one of the most risky and complex rescue operations the world has ever seen. Australian doctor Richard Harris and his dive partner, Craig Challen, were among the last out of the cave, 18 days later.

Massola recreates the drama, tension and inspiration of the days in July 2018 when the eyes of the whole world were trained on a remote Thai mountain.
More books by this author

James Massola is South-east Asia correspondent for Fairfax Media. He was previously chief political correspondent for The Sydney Morning Herald and The Age, based in Canberra. He is the winner of a Quill award for investigative journalism and has been a Walkley and Quill Award finalist on two other occasions. He was on the ground at Tham Luang cave for the rescue operation.