The Woman Who Wasn't There

The true story of the fraud that shocked America 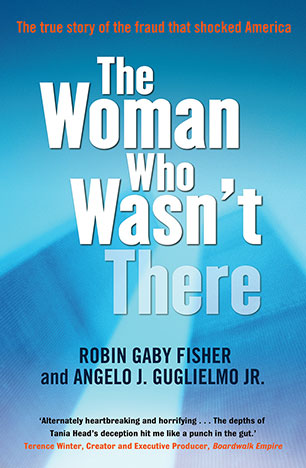 The true but incredibly strange story of Tania Head and how she fooled America.

It was a tale of loss and recovery, of courage and sorrow, of horror and inspiration. Tania Head's astonishing account of her experience on September 11, 2001 - from crawling through the carnage and chaos to escaping the seventy-eighth-floor sky lobby of the burning south tower to losing her fiance in the collapsed north tower - transformed her into one of the great victims and heroes of that tragic day.

Tania told her story to schools, politicians, newspapers and to local support groups and women's organisations, eventually becoming a symbol of survival.

Tania selflessly took on the responsibility of giving a voice and a direction to the burgeoning World Trade Center Survivors' Network, helping save the 'Survivor Stairway' and leading tours at Ground Zero, including taking then-governor Pataki, Mayor Bloomberg, and former mayor Giuliani on the inaugural tour of the WTC site. She even used her own assets to fund charitable events to help survivors heal.

Tania Head represented the most intense hope to have broken into their lives since that crystal clear September morning in 2001. If Tania could transcend the ruin that the terrorist attack had brought upon her, how could they not step out of their own torment?

But there was a problem that would emerge, much later, with Tania's story. None of it was true.

Told with the unique insider perspective and authority of Angelo J. Guglielmo, Jr., a filmmaker shooting a documentary on the efforts of the Survivors' Network, and previously one of Tania's closest friends,The Woman Who Wasn't There is the story of one of the most audacious and bewildering quests for acclaim in recent memory-one that poses fascinating questions about the essence of morality and the human need for connection at any cost.

I used to think I was a filmmaker first and getting the story was only thing that mattered. And I then met Tania Head and everything changed. - Angelo J. Guglielmo, Jr.
More books by this author

Robin Gaby Fisher is the author of the bestseller AFTER THE FIRE. She is currently collaborating on a memoir entitled I AM YAMMA BROWN with the daughter of the late singer James Brown. She is a two-time finalist for the Pulitzer Prize in Feature Writing; a member of a Pulitzer Prize winning team; and the winner of The National Headliner Award; and the Nieman Foundation for Journalism at Harvard's Taylor Family Fairness in Media Award. She teaches narrative journalism at Rutgers University in New Jersey.

Angelo J. Guglielmo Jr. is an award-winning documentary filmmaker. He is the producer and director of the documentary The Woman Who Wasn't There. Born in New York, he was accepted into the American Film Institute but chose to make the award-winning documentary Idling Brando instead. Idling Brando follows Hollywood legend-in-the-making Dennis Woodruff, a homeless actor searching for his big break while living out of his car on the streets of Los Angeles. The film was screened in over 21 film festivals around the world, including Slamdance, Chicago and Columbus. He has written screenplays for the feature films Days of Grace, which has been optioned by Academy Award-winner Lee Grant, and the thriller Sleeping Dogs Lie, which is in development. His 9/11 documentary, The Heart of Steel was an official selection at The Tribeca Film Festival, The American Film Festival, and has played at The White House, The United Nations, The US State Department, and is on exhibition at the Tribute Visitor Center at Ground Zero. His latest project, The Woman Who Wasn't There, is in post production and is produced by Academy Award winner, Ross Kauffman (Born Into Brothels) in association with Meredith Vieira Productions.