Things a killer would know

The true story of Leonard Fraser 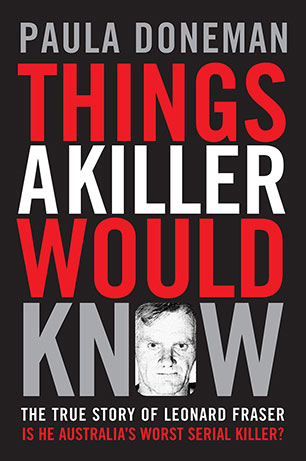 A no-holds-barred account of the deadly rampage of rapist and serial killer, Leonard Fraser.

In April, 1999, schoolgirl Keyra Steinhardt was bashed, raped and murdered in a brazen daylight attack as she walked home from school in the central Queensland town of Rockhampton. The disappearance of Keyra made international headlines as the community and law enforcement officers hunted for the nine-year-old. No one uttered it out loud, but everyone knew they were searching for a body.

When her killer, Leonard Fraser, finally led them to her two weeks later, it was the catalyst that went on to expose him as a murderous sexual predator. In 2000 he was found guilty of Keyra's murder. In 2003, he was tried in the Bribane Supreme Court for the murders of three women and a teenage girl in Rockhampton between December 1998 and April 1999. During the trial teenager Natasha Ryan was found alive hiding in the cupboard of her boyfriend's Rockhampton home - her emergence presented an intriguing twist in the story of this brutal and cunning killer. He was convicted for the murder of Beverley Leggo and Sylvia Benedetti and the manslaughter of Julie Dawn Turner.

Fraser is a suspect in up to eight unsolved disappearances of women in Queensland and NSW, although no remains have been found. He was serving four indefinite life sentences until his death on New Year's Day 2007 when he died of a heart attack in a Brisbane prison hospital.
More books by this author

Paula Doneman is the Crime Editor at the Courier-Mail, Queensland's daily newspaper. She has been a journalist for fourteen years, specialising in investigative journalism in crime reporting. While Chief Police Reporter for the newspaper, Doneman covered the Leonard Fraser story from the beginning and has worked closely with the team of Queensland Homicide detectives, 'Taskforce Alex', who tracked the serial murderer. Born and raised in Brisbane, she is the daughter of a retired police officer and a psychologist.

Chapter 4 Monster in the midst

Chapter 13 Things only the killer would know

Chapter 14 Back from the dead