Stonewalled by the Catholic church and betrayed by his own police force over decades: the remarkable story of Denis Ryan's long struggle for justice. 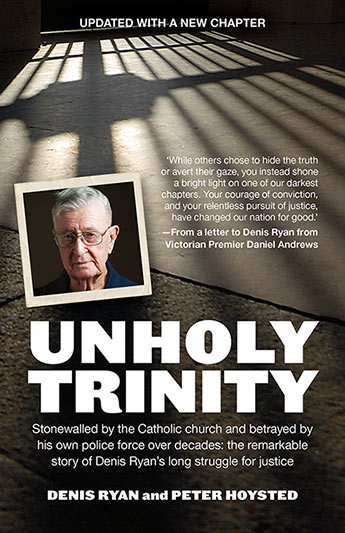 One policemen's desperate and moving account of how he tried for decades to bring a paedophile priest to justice - but was blocked by not only the Catholic church, but by his own Police Force.

One policeman's desperate and moving account of his struggle to bring a depraved paedophile priest to justice?only to find himself obstructed by the Catholic Church and betrayed by his own police force.

Now, decades later, justice has finally been done and Denis Ryan has been vindicated.

Monsignor John Day died in 1978. He was arguably Australia's worst paedophile priest, his victims counted in the hundreds. Yet when Day died, he was feted by Bishop Ronald Mulkearns as having 'faithfully fulfilled his ministry in God's name'.
The Church had known about Day's activities for years. Unbelievably, his terrible crimes had been committed with the knowledge and protection of senior members of the Victoria Police as well as the senior officer of the court in Mildura. Together the three men cast a shadow over the city that remains today.

Denis Ryan, a young police detective from Melbourne, had transferred to Mildura in the early 1960s. He quickly gained the trust of the people there. One by one the victims started coming forward?children who had been molested by Monsignor Day and their shocked and sometimes disbelieving parents.

Armed with a dozen or more signed statements, Ryan had sufficient evidence to lay charges. Then began his nightmare, as his every step towards bringing Day to justice was blocked by the Catholic Church and then the Victoria Police. Over decades, Ryan never stopped fighting to have his story and those of Day's countless victims heard, to no avail.

Now at last the truth has been told, thanks to this book and the Royal Commission. Five years after first publication of Unholy Trinity, here is Ryan's updated story, told in his own words, and the tragic accounts of Day's victims, many of whom are alive today.

After nearly 50 years, their voices have finally been heard.
More books by this author

Peter Hoysted is an author, columnist and television producer. He co-wrote Shallow Graves in 2000 with Sydney based crime writer, Paul Kidd and was the producer and writer of Tough Nuts: Australia's Hardest Criminals, a 16 part true crime series which screens on Foxtel's Crime Investigation channel.

Peter is an online columnist with The Australian, writing under the nom de plume of Jack the Insider.

Denis Ryan is the former Victorian Police officer who sought to bring the paedophile priest, Monsignor John Day to justice and break the nexus that extended police protection to the priest. Denis paid a heavy price for his determination and was effectively forced from service; offered a transfer that police knew he would not take.

After his retirement from the Victorian Police Force, Denis became Shire President of Mildura in 1979. He established the first Ethnic Advisory Council in Victoria in 1977 and remained its chair until 1980.