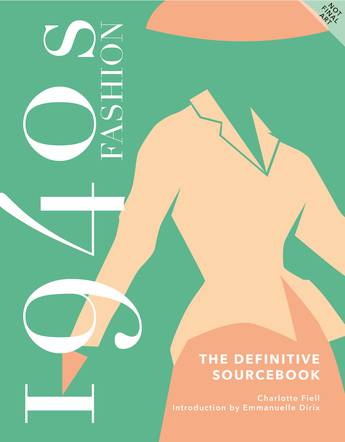 This sourcebook is a season-by-season fashion evolution of the Forties, featuring original photos and illustrations. Includes analysis of the social, economic and cultural factors that influenced this period, and information about the major designers.

From the ashes of the Second World War arose inventive and forward-thinking designs, the likes of which had never been seen in fashion before, or since.

The early Forties were defined by thriftiness and practicality, but the latter half of the decade saw an explosion of elegance. Fashion Sourcebook 1940s is an extensive survey that brings together previously unpublished photography and beautifully drawn illustrations to provide a comprehensive overview of the period, from the austerity of the war years to the introduction of Dior's revolutionary 'New Look', and the rise of Hollywood glamour.

From haute couture to ready-to-wear, follow the season-by-season fashion evolution of the Forties. Featuring images of the decade's icons such as Joan Bennett, Veronica Lake and Barbara Stanwyck, and designers including Dior, Lucien Lelong, Balmain, Nina Ricci, and Worth.

Including an introduction by fashion historian Emmanuelle Dirix, discover the different trends of the period and uncover the biographies of the decade's lauded designers in an in-depth look to who shaped the 1940s fashion world.
More books by this author

Charlotte Fiell is a leading design historian who has written numerous bestselling books on all aspects of design. She studied at the British Institute in Florence, Camberwell College of Arts in London, and later trained at Sotheby's Institute, also in London.Emmanuelle Dirix is a highly regarded fashion historian and curator. She lectures on Critical and Historical studies at Winchester School of Art, Central Saint Martins, the Royal College of Art and the Antwerp Fashion Academy. She regularly contributes to exhibition catalogues and academic volumes. Recent projects include the exhibition and bookUnravel: Knitwear in Fashion,Fashion Sourcebook 1920s and1930s Fashion: the Definitive Sourcebook.