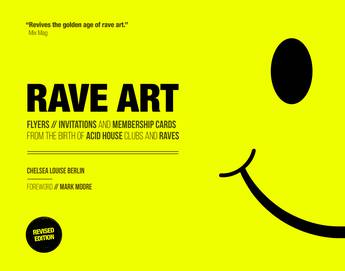 A unique and original collection of flyers, exclusive invitations and rare memberships to legendary clubs and events. A fascinating insight into a socio-cultural phenomenon that changed music, the law drug culture, dance, fashion, design.

In the mid- to late 1980s, rave culture developed. It influenced music, design, art, drugs, fashion, language and even the law. Originally emerging in the USA, it was refined in the UK by people who wanted to dance, party and express themselves in terms of art and music. It started in in small, sweaty clubs but such was the popularity that soon enormous Raves, with tens of thousands of people, were common.

'House' music and illegal drug ecstasy were the driving forces behind what turned into a global phenomenon. Events that started as secretive nights in underground clubs, with word-of-mouth advertising grew from one-off take-overs of unusual venues into huge open land-based events. Pager and telephonic communication became the medium of message-passing, and flyers were key to it all: informing the right people about the right place at the right time. Chelsea Berlin was there from the beginning, attending many of the now legendary events, from Club Shoom to Energy and beyond.

In Rave Art, the whole exciting movement is documented through the flyers that were handed out freely (often privately) to inform partygoers of the next venue. Flyer design became an artform, and this book contains hundreds of the most significant and rare examples from Chelsea's huge collection.

Together with personal reminiscences and quotes from famous, infamous and not-so-famous attendees, Rave Art paints a vivid picture of what is probably the last significant youth culture movement of modern times.
More books by this author

Chelsea Louise Berlin studied art and design at Chelsea School of Art and started a company in the mid-1980s, producing hand-printed and painted t-shirts, paintings and banners. She has exhibited paintings, sculptures, furniture and photography and was involved in interior design, window dressing and prop making. She is custodian of her 'Berlin Collection', which comprises thousands of items of ephemera and collectables from the 1980s onwards, including nightclub and rave flyers, VIP cards and memberships, postcards, tart cards, magazines and film posters. Chelsea lives and works in London.

Category: Visual arts
ISBN: 9781787394988
Edition No: 2
Table Of Contents: Foreword by Mark Moore.
Introduction: A look back at the roots of dance music and how rave culture emerged. The musical, political and cultural heritage of the movement.
Flyers, Invites and Membership Cards: Hundreds of the most interesting, colourful and significant pieces of art from a ten-year period. Chelsea provides a commentary, drawing the reader's attention to particular events and places where necessary.
Chronology: The key moments including the 'freedom to party movement', the music of the times and people documented (prominent DJs, organisers and others involved).
Publisher: Welbeck
Imprint: Welbeck
Page Extent: 200
Format: Hard Cover
Subject: The arts