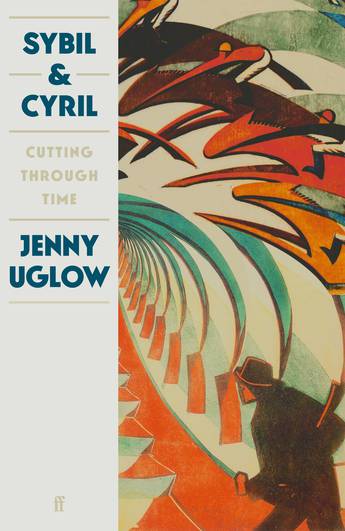 From one of our most admired writers, a beautifully illustrated story of a dynamic artistic partnership between the wars.

In 1922, Cyril Power, a fifty-year old architect, left his family to work with the twenty-four year old Sybil Andrews. They would be together for twenty years. Both became famous for their dynamic, modernist linocuts, streamlined, full of movement and brilliant colour, summing up the hectic interwar years. Yet at the same time they looked back, to medieval myths and early music, to country ways disappearing from sight.

Cyril & Sybil traces their struggles and triumphs, conflicts and dreams, following them from Suffolk to London, from the New Forest to Vancouver Island. This is a world of Futurists, Surrealists and pioneering abstraction, but also of the buzz of the new, of machines and speed, shops and sport and dance, shining against the threat of depression and looming shadows of war.
More books by this author

Jenny Uglow grew up in Cumbria. A former Editorial Director of Chatto & Windus, she is the author of prize-winning biographies and cultural histories, from The Lunar Men: the Friends who made the Future (2002) to In These Times: Living in Britain through Napoleon's Wars, 1793-1815 (2014). Her interest in text and image is explored in Words and Pictures: Writers, Artists and a Peculiarly British Tradition (2008), and in biographies of William Hogarth, Thomas Bewick, Walter Crane and most recently in Mr Lear: A Life of Art and Nonsense, winner of the Hawthornden Prize in 2018. She was created an OBE in 2008, and was Chair of the Royal Society of Literature 2014-2016. She lives in Canterbury and Borrowdale, Cumbria.