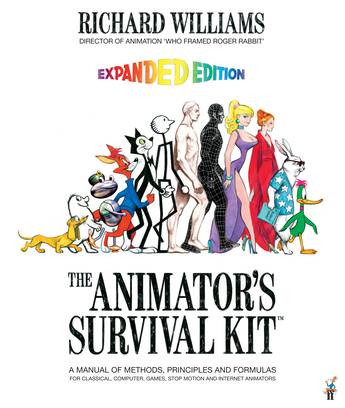 Animation is one of the hottest and most creative areas of film-making today .

This is the one book every animator should have on their desk - whether they work in film, computer graphics or video game animation. Richard Williams is the pre-eminent figure in motion picture animation, and he has forged a reputation as an outstanding teacher as well as a top practitioner. In recent years, the Academy Award for animation effects has been virtually guaranteed to go to a student of Richard Williams, whether the movie in question is Toy Story or Star Wars: The Phantom Menace.

This book is based on master-classes Richard Williams has been giving to professional and would-be animators around the world over the years. Companies such as Industrial Light and Magic, Disney, and Dreamworks send their animators to study at Williams' feet as he is generally regarded as the link between the 'golden Age' of Disney animation and the new-style computer animation exemplified by Toy Story.
More books by this author

Richard Williams is best known as the Director of Animation and designer of the new characters for Who Framed Roger Rabbit, for which he won two Academy Awards including a Special Achievement Award. Canadian-born Williams has won three US Academy Awards, three British Academy Awards, and an Emmy among 246 international awards - starting with his first film The Little Island in 1958. Williams has also animated title sequences for Return of the Pink Panther, The Pink Panther Strikes Again, What's New Pussycat, Casino Royale and linking sequences for The Charge of the Light Brigade, as well as countless prize-winning commercials. In 1990 he was voted by his peers as 'The Animator's Animator'.