Visionary Founder of the Bauhaus 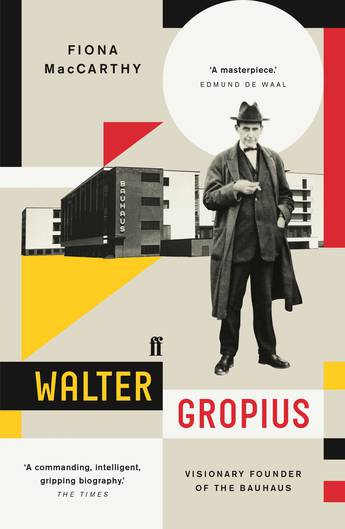 In her majestic biography of Walter Gropius, charismatic founder of the Bauhaus, Fiona MacCarthy argues that his visionary ideas still influence the way we live, work, and think today.

Mention the Bauhaus and iconic objects such as a Marianne Brandt teapot, an Anni Albers weaving or a Marcel Breuer chair leap to mind. But the Bauhaus was more than an art school - it was the birth of a radical new philosophy of design: a constellation of talents including Kandinsky, Klee and Moholy-Nagy, at the heart of which was Walter Gropius.

MacCarthy grippingly narrates the story of the ground-breaking architect's life beginning with his shattering experiences in World War One before his turbulent marriage to the notorious Alma Mahler and the tragic death of their daughter. After Gropius' agonized decision to leave Nazi Germany in 1933, she explores his life in exile by tracing how a disorientating period in London evolved into a peaceful marriage with Ise Gropius and his late starring role in twentieth-century architecture in America.

Challenging views of Gropius as a doctrinaire modernist, MacCarthy's modern reassessment of Gropius' interior life is biography at its finest: insightful, witty, and gloriously three-dimensional.
More books by this author

A former Guardian critic, Fiona MacCarthy established herself as one of the leading writers of biography in Britain with her widely acclaimed book Eric Gill (1989). Her next book, William Morris (1994) won the Wolfson History Prize.Her biography Byron:Life and Legend (2002) has been described as 'one of the great literary biographies of our time'. She also received the James Tait Black Memorial Prize for The Last Pre-Raphaelite (2011), and was awarded the OBE in 2009. She is a Fellow of the Royal Society of Literature, an Honorary Fellow of Lady Margaret Hall, Oxford, and a Senior Fellow of the Royal College of Art. She was married to David Mellor (1930-2009), one of Britain's leading industrial designers.