A Book of Dreams 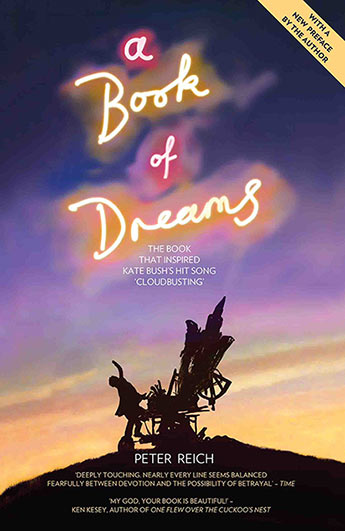 A Book of Dreams, the inspiration behind Kate Bush's 1985 hit song 'Cloudbusting', and widely regarded as a classic of writing about childhood, is at last available in paperback again.

This famous book, the inspiration behind Kate Bush's 1985 hit song 'Cloudbusting', is the extraordinary account of life as friend, confidant and child of the brilliant but persecuted psychoanalyst Wilhelm Reich. Peter, his son, shared with his father the revolutionary concept of a world where dream and reality are virtually indistinguishable, and the sense of mission which set him and his followers apart from the rest of the human race.

Here, Peter Reich writes vividly and movingly of the mysterious experiences he shared with his father: of flying saucers; the 'cloudbuster' rain-makers and the FDA narks; and of the final tragic realization of his father's death, which woke him up to the necessity of living out his life in an alien world.

Already regarded as a modern classic, A Book of Dreams is not only a beautifully written narrative of a remarkable friendship and collaboration, but a loving son's heartfelt tribute to a loving father.
More books by this author
Category: Other books
ISBN: 9781786069627
Publisher: Bonnier
Imprint: John Blake
Page Extent: 224
Format: Paperback - B format
Subject: Psychoanalytical theory (Freudian psychology)