A Life in Words

Collected writings from Gallipoli to the Melbourne Cup 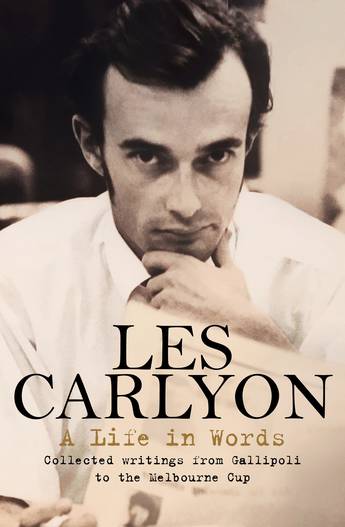 The collected writing of one of Australia's most admired authors and journalists, Les Carlyon.

'Les Carlyon has died, and Australia has lost one of its greatest wordsmiths.' Greg Baum, The Age

'He's been called Australia's Damon Runyon, but that tag is far too limiting to do him justice. Certainly his turf stories are usually character-driven gems. But read him on Anzac Cove, or Bradman, or Ted Whitten, or any part of the essence of this country. He writes with gritty elegance.' Harry Gordon

Les Carlyon was one of Australia's greatest journalists and writers. His career in newspapers was stellar, becoming editor of The Age at 33, and going on to become editor in chief of The Herald & Weekly Times. But he was always more about the written word than about management, winning two Walkley Awards and the coveted Graham Perkin Journalist of the Year Award across a career where he covered everything from politics to horse racing.

Yet most Australians will know him as an author, writing books that gave us the very essence of our history and our culture - whether in the trenches of the Western Front, or in the betting ring at Flemington. His epic account of the Gallipoli campaign, Gallipoli (2001), was as ground-breaking in its day as Robert Hughes' The Fatal Shore, combining incredible research and an ability to capture the human essence with a style that was distinctively his own. Gallipoli went on to sell over 250,000 copies in Australia, and his follow-up book The Great War (2006) won the Prime Ministers Prize for History, and was the 2007 ABIA Book of the Year. The Master (2012), an intimate portrait of Bart Cummings, cemented Les's place as Australia's greatest ever horse racing writer.

From Don Bradman to Paul Keating, from Flemington to Flanders, from Henry Lawson to Clive James, A Life in Words is a collection of Les's very best writing, taken from across his career.
More books by this author

Les Carlyon was born in 1942 and died in 2019. He was universally admired as a superlative descriptive writer. He was a reporter, editor, historian, educator and mentor. But above all he was a gifted storyteller, combining elegant prose with a laconic irreverence and biting analysis. He was editor of The Age and editor-in-chief of The Herald and Weekly Times. He shone as a turf writer and war historian. He quietly mentored a generation of Victoria's best journalists, won two Walkleys and is the only journalist to receive Lifetime Achievement awards from both the Walkley Foundation and the Melbourne Press Club. In 2014, he was made a Companion of the Order of Australia.