A Long Way from Wyandra

My story - from the bush to Black Caviar 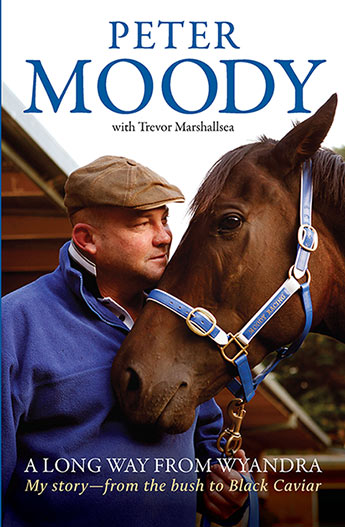 The forthright, fascinating memoir of Peter Moody, trainer of Black Caviar and one of Australia's most high-profile and best-liked racing identities.

The classic story of a boy from the bush who worked his way from outback Queensland all the way to Royal Ascot.

As a kid growing up in tiny Wyandra, Peter Moody learned to ride almost before he could walk. Horses were part of life, and as a teenager working for local trainers he learned many lessons - some of them painful - as he built his understanding of them. A mate's introduction got him a stablehand's job for the legendary trainer Tommy Smith in Sydney, and his life changed forever.

His journey was to see him learn from some of the greatest minds in racing, as he plied his trade in Sydney, Brisbane and finally Melbourne, establishing his own highly successful stables, Moody Racing. One of the biggest innovators and risk-takers in this country's turf history, Moody won four premierships in Melbourne, the Mecca of Australian racing. But to the wider public he's best-known as the man who gave us the phenomenal Black Caviar. His account of her career is unique. He was, quite simply, the man who knew her best.

From outback childhood, to strapper, foreman and then on to premiership-winning trainer and the guiding force behind the most famous horse of recent times,and finally to his clash with officialdom that prompted him to retire in the deepest frustration, Peter's autobiography gives a hugely entertaining, fascinating and authentic insight into one of the largest characters in Australian sport. While much has been written about Moody's career and legacy, it was fellow trainer, Caulfield Cup-winner Jim Mason, who perhaps said it best: 'He's like a champion horse. Occasionally something comes along that's just better than everything else. That's Pete.'
More books by this author

From the tiny Queensland town of Wyandra to Royal Ascot and all racecourses in between, Peter Moody has left his mark as a horse trainer.

Peter honed his skills with the bush trainers of his native Queensland before moving to Sydney where he worked for Hall of Fame trainer Tommy Smith, then on to Brisbane and finally Melbourne where he established his stables, Moody Racing.

He has won the Australian Premiership, Victorian Metropolitan and Provincial premierships on four occasions as well as the leading Group One trainer in Australia both in number of wins and prize money twice. He has trained more than 50 Group 1 winners throughout his career, including the legendary Black Caviar, who retired unbeaten with an unprecedented 25 straight victories.