A Story of Seven Summers

Life in the Nuns' House 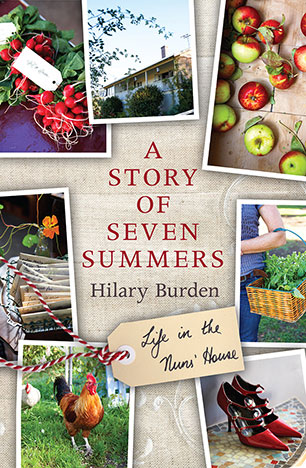 From London journalist to owner of the historic, ramshackle Nun's Cottage and two alpacas (named Jack and Kerouac) and providore of local produce, this is Hilary Burden's journey.

'Looking back over seven summers, I know that who I am is where I am. It might not be the secret to life, but it is the secret to this life . I'll tell you how that came to be and that will be the story of the Nuns' House.'

On the outside, Hilary Burden was living a glamorous life -- she was a busy, high-flying, globetrotting magazine journalist based in London, who thought nothing of flying to New York for a weekend, interviewing movie stars in luxury hotels or jetting off to Italy on assignment to hunt truffles with Curtis Stone. But on the inside, something was missing in her life and she didn't know quite what it was.

Deciding that she wanted to make her own life, Hilary returned to Tasmania. She bought a ramshackle old house - the Nuns' House - with a sprawling, neglected garden, and gave herself the time and space to begin again. There was no particular kind of plan, but things just somehow worked. Now, seven summers later, she has a home, a garden, two alpacas (named Jack and Kerouac), two chooks (called Marilyn and Monroe), a purpose and a passion.

A beautiful, intimate and inspiring story of having the courage to step into the unknown.

Hilary Burden was born in Britain, grew up in Tassie and has worked away - Sydney, London, Tokyo - for over 20 years while still calling Tasmania home. She is a journalist who has worked with Conde Nast, Elle, The Sunday Times, the BBC, Cosmo and Grazia. She has also run her own business in Soho. Seven years ago, she sold her flat on Hammersmith Bridge in London and moved to Karoola in the northeast of Tamania where she now lives on roughly two acres.