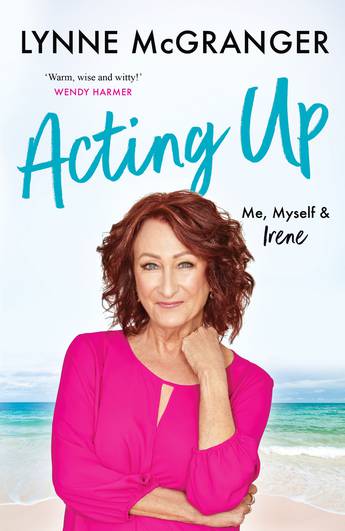 With humour, honesty and self-deprecating charm, one of Australia's best known TV actresses lifts the lid on life - both on-screen and off.

From a young age, I could lie like a chop in gravy. I loved the thrill of crafting a story. It wasn't until my twenties that I made the connection that lying is a lot like acting…

For almost 30 years, Lynne McGranger has been entertaining TV viewers all around the world. As a veteran on the popular soap Home and Away, her much-loved character Irene Roberts has long been a font of wisdom, good humour and unforgettable lines.
But Lynne's story goes far beyond Summer Bay. From an Aussie childhood full of fad diets (tuna, milk and oranges, anyone?) to the relationship heartaches, career disasters and difficult choices that would change her life forever. But then Lynne landed a 'guest role' on Home and Away that's lasted 29 years and counting …

Acting Up: Me, Myself & Irene is a warm, hilarious and intimate look inside the life of one of Australia's living TV legends.
More books by this author

Lynne McGranger is an Australian actress best known for her role as Irene Roberts on the popular soap opera Home and Away. She is the second-longest serving cast member after Ray Meagher. She joined the series in 1993, taking over from actress Jacquy Phillips who originally portrayed the character of Irene from 1991 to 1992. As of 2021, McGranger is the longest serving female cast member of a television soap opera in Australia after playing the role for over 28 years.

Lynne's online following has seen her front campaigns for brands such as Optus, 20th Century Fox, Hello Fresh, Black Pepper Clothing and Australian Hearing Week. She is a proud ambassador for Save Our Sons (Duchenne Muscular Dystrophy), Childfund Australia, and is a devoted supporter and ambassador for the AFL's Sydney Swans.