Angel in the Rubble 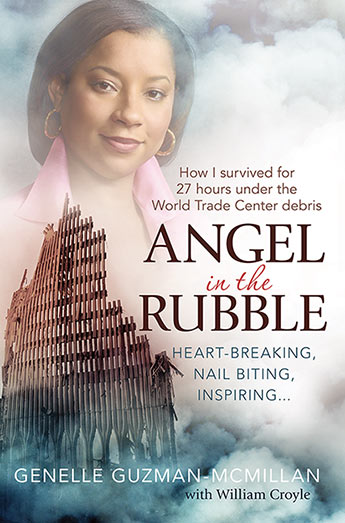 A heart-breaking, gripping, authentic, life-affirming true story for our times from the last survivor to be pulled out alive from under the wreckage of the North Tower of the World Trade Centre.

'I interviewed Genelle Guzman just after the world changed on September 11, 2001. I wondered how what she went through would affect her life in the years to come. In this eloquent and poignant book, I ended up reassured and inspired. And not just about Genelle, but about humanity. Even though we know Genelle was the 'last survivor', the detail in this book is intricate and tense; as you read each word it makes you angry, sorrowful and incredulous all over again. This isn't just Genelle's incredible story . this is a story we will never forget.' - Gary Tuchman, CNN national correspondent

On 11 September 2001 Genelle started her working day like any other: throwing on her high heels, dashing off to work on the 64th floor of the northern Twin Tower of the World Trade Center, organising coffee for workmates, and settling down to her work. Then they hear a loud bang. The floor shakes, but nothing dramatic seems to have happened.

Clouds of paper start to float past the window. Some time later Genelle and her co-workers discover a plane has slammed into their building. They're advised to remain where they are, which they do. Eventually they take matters into their own hands and begin to make their way down the endless flights of now empty stairs. They were so near their goal. Then the building begins to sway and the entire tower collapses on Genelle. She finds herself alone and unable to move in the dust and the darkness.

This riveting story brings to life Genelle's 27 hour ordeal and rescue from under the debris of the 9/11 World Trade Center wreckage. Genelle, the last survivor to be pulled from Ground Zero, shares her miraculous experiences during those 27 long hours, and the immense richness of her life beyond it.

The remarkable true story of the day that changed Genelle Guzman-McMillan's life.
More books by this author

Genelle Guzman McMillan, 39, was born and raised in Trinidad. She currently works in New York City at the Port Authority of New York and New Jersey in New York City. Genelle has been the recipient of several awards and proclamations since 9/11, including a Medal of Honor from the Port Authority, and is a volunteer for the American Red Cross. Her story has been featured on television and in numerous publications, including Oprah, The Early Show on CBS, Time and Guideposts magazine. She lives in Long Island, New York, with her husband, Roger, and four children - Kadeem, Kimberly, Kaydi and Kellie.