At the Birth of Bowie

Life with the Man Who Became a Legend 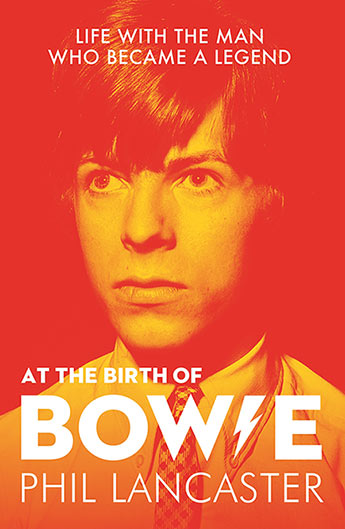 At the Birth of Bowie is a new, personal look at the genesis of a music legend.

It is 1965, and Swinging London is coming into its prime years. The streets are alive with mods and rockers, playboys and good-time girls, all revelling in the blossoming artistic, creative and cultural energies of the decade.

Amid the colour and chaos is a boy sporting drainpipe jeans, an immaculately tailored sports coat and a half-inch wide tie. A devoted fan of The Who, he looks the part in his pristine mod gear. As the lead singer of the Lower Third, his talent is shaping itself into something truly special.

His name is Davy Jones. In ten years, he will be unrecognisable as fresh-faced boy of 1965, and in just over fifty years, his death will be mourned by millions, his legacy the story of the greatest rock star of all time.

And, all through the years of the late sixties, Phil Lancaster was by his side. As the drummer in Bowie's band, the Lower Third, Phil was there as the singer's musical stripes began to show, and was witness to his early recording techniques, his first experimental forays into drug-taking, and the band's discovery of his bisexuality in shocking circumstances.

In this riveting - and often very funny - memoir, Phil tells the story of life alongside the insecure yet blazingly talented boy who became Bowie, at a critical crossroad of time and place in music history. What follows is an intimate, personal and important perspective on the genesis of one of the most iconic musicians of the twentieth century - one that gets under the skin of the man himself, before the personas and alter-egos masked the fascinating figure beneath them.

At the Birth of Bowie is essential reading for anyone who knows what happened on Bowie's journey, but wants to understand how, and why, it ever began.
More books by this author More books in this series

Phil Lancaster is a professional drummer across multiple styles. Born in Walthamstow on Boxing Day, 1942 Phil was both drawn to show business from a young age and took up the drums to form groups with close school friends, cutting his teeth on the changing musical styles of the day including skiffle, jazz and early rock before finally turning fully professional at the age of 21. After returning from live engagements in Europe and in need of a new group Phil followed up a music paper advert and met a 19-year-old singer called David Jones (who had yet to change his name to Bowie) at the famous Gioconda cafe in Denmark Street, thus becoming a member of Davy Jones and The Lower Third - the band with whom David Jones would become David Bowie - all without a formal audition.

Kevin Cann is a Bowie expert who has worked as a designer and writer for the last 35 years. His publications include David Bowie A Chronology for Vermilion, and Kevin's definitive early years account of Bowie's life and career - Any Day Now, The London Years - 1947-1973 - which received wide recognition, and was also highly regarded by David himself. He also acted as consultant on David and Mick Rock's 2002 Genesis Publications book Moonage Daydream - The Life and Times of Ziggy Stardust. He also researched, co-designed and co-ordinated the reissue of David's back catalogue with EMI (17 albums), and has contributed chronologies and sleeve notes for numerous David Bowie 30th and 40th anniversary releases, including Ziggy Stardust, Diamond Dogs and Station To Station.