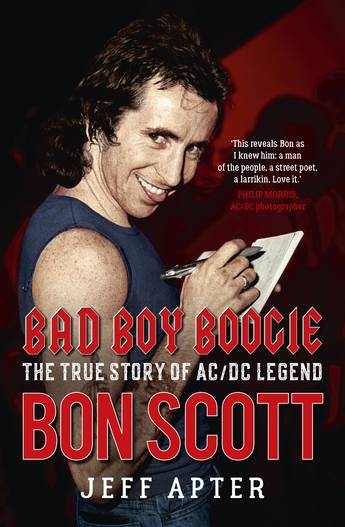 Bon Scott was once asked if he was AC or DC. 'Neither,' he grinned, 'I'm the lightning flash in the middle.' And that's how he lived his life.

No one had the same skill with lyrics as Bon, who called his words 'toilet poetry', his 'dirty ditties'. He could also vividly depict life on the road, best heard in the AC/DC classics 'Long Way to the Top' and 'Highway to Hell'.

When Bon appeared on Countdown in March 1975, the impression he left was indelible. The ugliest schoolgirl to ever grace the small screen, Bon was a mess of tattoos and pigtails, wearing an awkwardly short skirt, all the while puffing on a ciggie. His bandmates, not just the audience, were in hysterics. The video quickly became part of Oz rock folklore.

Bon was always the joker in the AC/DC pack. He'd happily pose for a photograph with a joint dangling from his lips or be interviewed in cut-off shorts with a banana provocatively stuffed into his waistband. Anything to elicit a laugh. The off-stage stories surrounding Bon are legendary. After spending a lively couple of days with Bon, Ol' 55 singer Jim Manzie said, 'My rock-and-roll education was pretty much complete.'

Bad Boy Boogie is the first biography to focus on Bon's remarkable gifts as a lyricist, frontman and rascal. In short, the real Bon Scott.
More books by this author