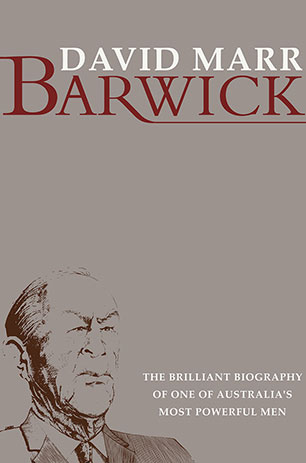 This powerful biography brings to life Australia's most powerful and controversial Chief Justice. An Australian classic, it is David Marr's first book.

'The brilliant biography of one of Australia's most powerful men a special book.' The Age

For forty years Sir Garfield Barwick stood at the centre of power in Australia. He was an advocate who saved the private banks from Chifley and fought to destroy the Communist Party. He was the Attorney-General who reformed the divorce laws and the Foreign Minister who put Australian troops in Vietnam. He was the Chief Justice who broke down the tax laws, dramatically advanced the power of Canberra and gave Sir John Kerr the constitutional imprimatur to dismiss the Whitlam government.

Barwick is the portrait of a complex and driven man who began life in the Sydney slums, a man totally committed to the exercise of power and utterly certain of the rightness of his beliefs. It is also a remarkable insight into the inner workings of Australia's supreme legal institution.

Winner of the NSW Premier's Literary Award, Barwick is an Australian classic.
More books by this author

David Marr is the multi-award winning author of Patrick White: a Life and The High Price of Heaven, and co-author with Marian Wilkinson of Dark Victory. In a career spanning over thirty years, he has written for The Bulletin and the Sydney Morning Herald, been editor the National Times, a reporter for Four Corners and until recently, presenter of ABC-TV's Media Watch.