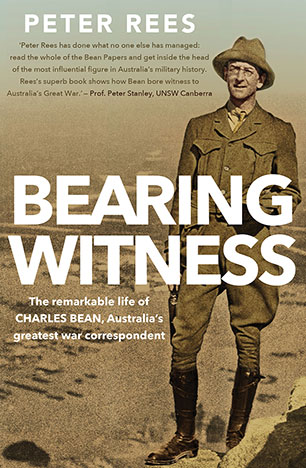 A full biography of the man known as CEW Bean - war correspondent and official historian of World War I - that for the first time captures and portrays the essence of the man, his work, his influence on Australian history, and how Australians have seen themselves in the century since the Great War.

'Peter Rees has done what no one else has managed: read the vast Bean archive and get inside the head of the most influential figure in Australia's military history. Rees's superb book shows how Bean bore witness to Australia's Great War.' - Professor Peter Stanley

'Part sophisticated military history, part story for a nation, Peter Rees provides a warm and deeply moving portrait of Charles Bean, one of the greatest Australians of the twentieth century.' - Michael McKernan

Charles Bean was Australia's greatest and most famous war correspondent. He is the journalist who told Australia about the horrors of Gallipoli and the Western Front. He is the historian who did so much to create the Anzac legend and shape the emerging Australian identity in the years after Federation. He is the patriot who was central to the establishment of one of this country's most important cultural institutions, the Australian War Memorial. Yet we know so little about him as a man. Bearing Witness rectifies that omission in our national biography.

This is the first complete portrait of Charles Bean. It is the story of a boy from Bathurst and his search for truth: in the bush, on the battlefield and in the writing of the official history of Australia's involvement in World War I. But beyond this, it is a powerful and detailed exploration of his life, his accomplishments and a marriage that sustained and enriched him.

Peter Rees has been a journalist for forty years, working as federal political correspondent for the Melbourne Sun, the West Australian and the Sunday Telegraph. He is the author of The Boy from Boree Creek: The Tim Fischer story (2001), Tim Fischer's Outback Heroes (2002), Killing Juanita: A true story of murder and corruption (2004), which was a winner of the 2004 Ned Kelly Award for Australian crime writing, The Other Anzacs (2008) republished as Anzac Girls (2014), Desert Boys ( 2011) and Lancaster Men (2013). He lives in Canberra.