And a World on the Brink 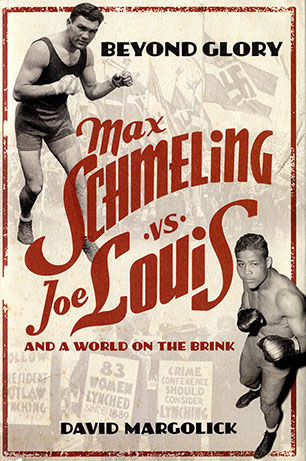 When they first met in the ring in 1936, Joe Louis was riding the crest of a wave and the German champion Max Schmeling was staging a desperately needed comeback. Schmeling had studied films of Louis' fights and knew his weak spots. Louis paid dearly, and while Schmeling regained his former glory and became the toast of Nazi Germany, Black America grieved.

Two years later, the rematch was about more than a boxing title. In Schmeling's corner were Hitler and Goebbels, along with millions of Germans and Austrians for whom Schmeling symbolized not just national pride but Aryan supremacy, and some Americans who were still uncomfortable with a black man's pre-eminence in anything. In Louis' corner were almost the entire black community of the US, not to mention many in the Caribbean and Africa, the young Nelson Mandela among them. Alongside the blacks, were Jews everywhere, including those trapped Hitler's Europe. And to a degree unprecedented in Jim Crow America there was a huge population of the white community, hoping that a black man would knock out a white man.

This is the story of a momentous fight that was not only symbolic of the coming struggle against the Third Reich, but also of the first glimmering of the post-war move towards civil rights in the USA. David Margolick has written a classic of sporting and social history.
More books by this author

David Margolick has been Legal Affairs Editor at the New York Times and is now a contributing editor at Vanity Fair. He is the author of three books, including Strange Fruit: Billie Holiday, Cafe Society and an Early Cry for Civil Rights. He lives in New York.