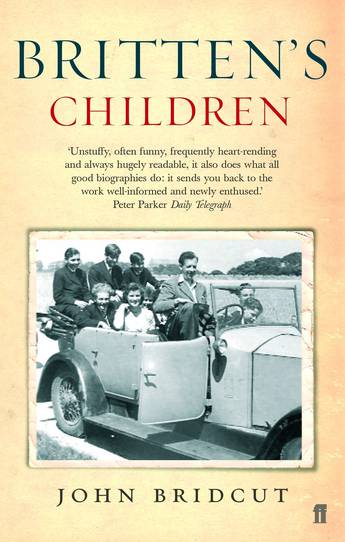 A unique and moving re-assessment of Benjamin Britten by the award winning film director, John Bridcut.

Britten's Children confronts the edgy subject of the composer's obsessional yet strangely innocent relationships with adolescent boys. One of the hallmarks of Benjamin Britten's music is his use of boys' voices, and John Bridcut uses this to create a fresh prism through which to view the composer's life. Interweaving discussion of the music he wrote for and about children with interviews with the boys whom Britten befriended. Bridcut explores the influence of these unique friendships - notably the late David Hemmings - and how they helped Britten maintain links with his own happy childhood.

In a remarkable part of the book Bridcut tells for the first time the full story of Britten's love affair in the 1930s with the 18-year-old German Wulff Scherchen, son of the conductor Hermann Scherchen. As Paul Hoggart of The Times commented, 'this type of love belonged to an emotional landscape that has vanished for ever, and we are the poorer for it.' Since making the film, the author has extended his research to include friendships Britten had with children which have not previously been documented.

The documentary Britten's Children won the Royal Philharmonic Society's 2005 Award for Creative Communication: 'this serious and beautiful film explored one aspect of a composer's life in great depth. Avoiding the temptation of sensationalism, Britten's Children was imaginatively researched and both touching and revelatory.'
More books by this author

John Bridcut has directed and produced television documentaries for the past twenty years or so, specialising in contemporary history, current affairs and the arts. For the Golden Jubilee in 2002, he produced BBC 1's four part series Queen and Country. He has recently profiled Hilary Clinton and Roald Dahl, and is currently working on a film about the realisation of Elgar's piano concerto. He has a lifelong enthusiasm for the music of Benjamin Britten; his documentary, Britten's Children, won the Royal Philharmonic Society Award 2005 for Creative Communication.