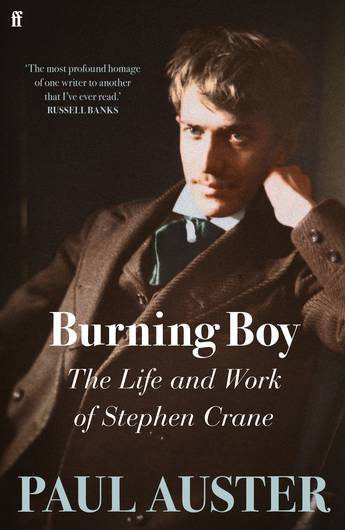 A major re-assessment of the genius of Stephen Crane - best known for The Red Badge of Courage.

Paul Auster takes the reader on a vivid journey through the brief 29 years of Stephen Crane's life. Auster analyses the major works with such enthusiasm that the reader immediately wants to read Crane's work.

Auster also brings to life the world of fin de siecle America as the 19th century ends and the 20th is beginning.

This pulsating world is the background to a life lived at a fever pitch - in war zones, near-drowning on his way to the Spanish American War, as well involvement in a scandalous love affair that caused him to leave the country.

Crane died in 1900, but he is not the last of the Victorians, he is the first of the Moderns.
More books by this author

Paul Auster is the bestselling author of Winter Journal, Sunset Park, Man in the Dark, The Brooklyn Follies, The Book of Illusions and The New York Trilogy, among many other works. In 2006 he was awarded the Prince of Asturias Prize for Literature and inducted into the American Academy of Arts and Letters.

Among his other honours are the Independent Spirit Award for the screenplay of Smoke and the Prix Medicis Etranger for Leviathan. He has also been shortlisted for both the International IMPAC Dublin Literary Award (The Book of Illusions) and the PEN/Faulkner Award for Fiction (The Music of Chance). His work has been translated into more than forty languages.