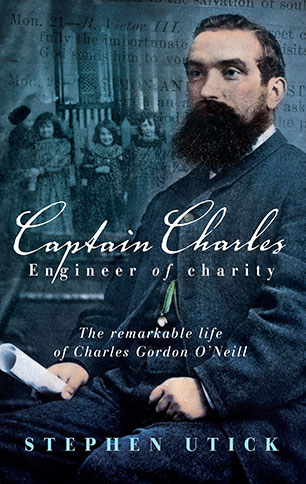 The extraordinary saga of the colonial character 'Captain' Charles Gordon O'Neill is told for the first time. An engineer, inventor, parliamentarian and philanthropist, Charles was a principal co-founder of the St Vincent de Paul Society in Australia and New Zealand.

Born of Irish parents in Scotland in 1828, O'Neill travelled to the colonies in 1863 with driving ambition, matched by entrepreneurial vision. A brilliant engineer, he helped create town plans, railway routes and tramways across New Zealand. Elected to the New Zealand parliament as a goldfields MP, he warned of the risk of climate change from destroying forests. He moved to Sydney in 1881 to work for the poor of Australia. Beginning in Sydney's wild Rocks district, he pioneered many charitable initiatives and established the St Vincent de Paul Society in New South Wales. His foresight was vindicated as the colonial age of gold was followed by the economic depression of the 1890s. In a bitter twist of fate, despite all his technical skill, access to capital and political connections, O'Neill died a pauper amid the slums of The Rocks in 1900.

'a fascinating, meticulously researched and detailed study of the life of Charles O'Neill The themes of personal sacrifice in the cause of social justice and the fight against poverty are universal and still contemporary.'

'Utick rescues a singularly intriguing character from undeserved obscurity; and in so doing makes an important and fresh contribution to the written histories of New Zealand and Australia. This is an elegant and informative narrative that should appeal to a wide readership.'

Associate Professor Hugh Laracy, The University of Auckland
More books by this author

Stephen Utick has postgraduate degrees in philosophy, theology and science and society, and has worked on science and research policy in Commonwealth Government departments for 25 years. He has been a volunteer for the St. Vincent de Paul Society since the age of 20, and researched Charles O'Neill's life together with retired professional engineer Vince Dever, a Fellow of Institution of Engineers Australia, and also a member of St. Vincent de Paul Society for the past 16 years.

2 The Christ of the Poor

7 The Politics of Progress

10 Backlash in The Thames

16 Foundation in The Rocks

19 Captain' Charles at the Helm of Charity