Finding my father, the singer who swapped Hollywood fame for home in Australia 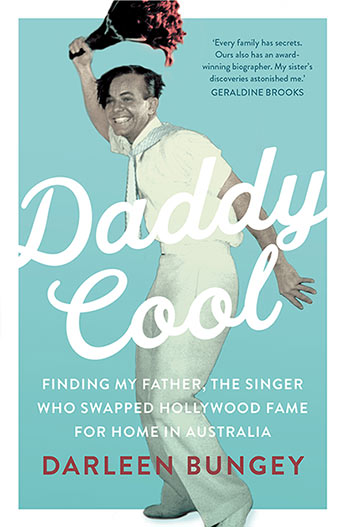 A captivating, generous and exquisitely written memoir of family and a daughter discovering her father's multi-layered life

'Every family has secrets. Ours also has an award-winning biographer. My sister's discoveries astonished me.' Geraldine Brooks

Who can ever truly know their parents?

He was a glamorous heart-throb, a famous American singer performing in front of Bette Davis, Katharine Hepburn, Clark Gable and other stars at the Academy Awards. In the 1930s, his recording of 'Hawaiian Paradise' outsold those of Bing Crosby and Guy Lombardo.

So how did he become an Australian infantryman, fighting alongside and performing for his fellow Diggers in Palestine, Beirut, Egypt and New Guinea? Why did he leave Hollywood and the ritziest hotels in America for a modest Californian bungalow in suburban Sydney? And what caused him to cease his endless drifting from one woman to another, one marriage to another, and settle with the love of his life?

She was a strong Aussie woman, a talented radio broadcaster and publicity agent. Why did she take a chance on this reckless vagabond and notorious womaniser?

Seeking answers, Darleen Bungey turns her biographical skills on her own family, exploring her father's multi-layered and at times tempestuous life with a truthful eye and loving heart.

'This memoir does maximum honour to the idea that each family is its own unique story. And in the case of Darleen Bungey, the tale she tells of Robert Cutter/ Lawrence Brooks, her father, is a charming and engrossing record of an exuberant, gifted, contradictory and brave man whose nationality was as varied as his gifts and who kept his daughters enriched and fascinated to the end. In an era of catastrophic family confessions, it reads like silk.' Tom Keneally

'This is something beautiful. Bungey's writing is as spellbinding and wondrous as the subject she has so bravely, forensically, gracefully explored. Further evidence that the most interesting people in our worlds were always waiting outside our bedroom doors.' Trent Dalton

'A daughter's tender tribute uncovers her father's past life of Hollywood glamour and scandal, reminding us that our parents had other lives, loves and secrets before we came along.' Caroline Baum

'A family story, beautifully told, of an American singer who turned his back on fame to live the life he needed in the suburbs of Australia. Daddy Cool is unexpected, sweet and raw.' David Marr
More books by this author