Friday on My Mind

The life of George Young 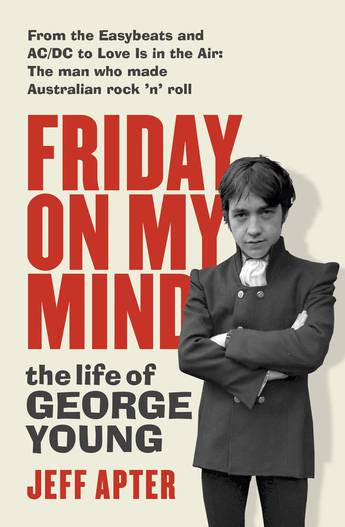 Pop star, mentor and icon, George Young was one of the most important figures in Australian pop music history. Jeff Apter reveals the little-known facts that helped create a music empire.

George Young wasn't so much on the charts for the best part of three decades: he and his musical partner Harry Vanda were the charts.

George's journey began with the trailblazing Easybeats and continued, alongside Harry, as producer/songwriter for hire with John Paul Young, The Angels, Rose Tattoo, Cheetah, Ted Mulry, Stevie Wright and, most crucially, AC/DC. George and Harry also struck gold with Flash and the Pan, almost by accident.

In this long-overdue book, the first to focus exclusively on the life and work of George Young, writer Jeff Apter explores George's long and fruitful association with Harry; his rare ability to maintain a stable married life with his wife Sandra; and his handshake deal with Ted Albert that helped create a music empire. The book also reveals such little-known events as the accident that almost killed off 'Hey, St. Peter' before its release, and the tragedy that bonded George and Harry for life.
More books by this author

Jeff Apter is the author of more than 20 music biographies, many of them bestsellers. His subjects include Johnny O'Keefe, Keith Urban, John Farnham, the Bee Gees, the Finn brothers and Angus and Malcolm Young of AC/DC. As a ghostwriter, he has worked with Kasey Chambers, Mark Evans (of AC/DC) and Richard Clapton. Jeff was on staff at Rolling Stone for several years and has written about legends such as Aretha Franklin, Patti Smith, Robbie Robertson, Bob Dylan, Chrissie Hynde and Lucinda Williams. In 2015, he worked on the Helpmann award-nominated live show A State of Grace: The Music of Jeff and Tim Buckley. Away from music, Jeff has also worked on books with soldiers and diplomats and sports greats such as Michael Slater and Tim Cahill. He lives in Wollongong, New South Wales, with his wife, two children and a cat that's so damned cool it needs no name. www.jeffapter.com.au