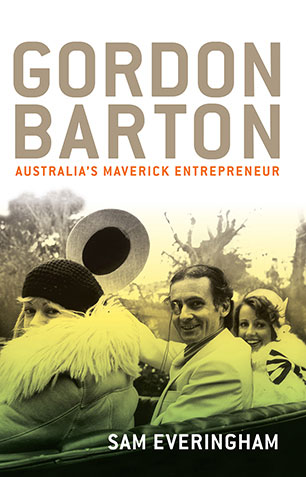 Charts the rise and fall of a dynamic and unconventional entrepreneur - the Gatsby of his time, Gordon Barton.

'A marvellous book that reminds us why Gordon Barton mattered.' -- Phillip Adams

Gordon Barton was the fast buccaneer who became the small-l liberal conscience of Australia. This book takes us on a rollercoaster read through the spills and thrills of his maverick life His was the Icarus trajectory, but he felt the sky before he fell.' -- Geoffrey Robertson QC

Gordon Barton is one of the most extraordinary business people Australia has produced. A prominent and provocative commentator with an entirely new vision for Australia, he founded the political party that eventually became the Australian Democrats, owned two radical newspapers including Nation Review, and built a vast commercial empire with interests in transport, mining, insurance, hotels, casinos, and book publishing and retailing.

Described as the Great Gatsby of his time, Barton's private life was wild and unconventional. He captivated women and counted among his friends the mistress of the whip Madam Lash, the lawyer Sir Lawrence Street, the legendary standover man Tim Bristow and the controversial editor Francis James. At the height of his business success, he generated countless headlines, but died a recluse in Italy having lost the European and Australian transport empires he worked so hard to create.

To know Gordon Barton is to understand a unique period in Australia's social and political history. Combining deep research with rich personal insight, Sam Everingham brings to life one of Australia's most dynamic and unconventional characters.
More books by this author

Sam Everingham is a Melbourne writer with a passion for Australia's hidden history. His first book, Wild Ride: The rise and fall of Cobb + Co was published in 2007.