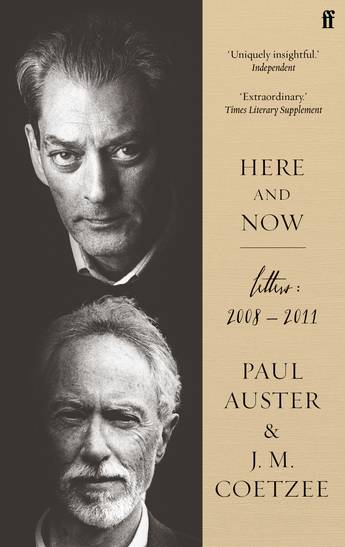 Here and Now is a collection of letters between Paul Auster and Nobel laureate J. M. Coetzee, two of the greatest writers of our time.

Although Paul Auster and J. M. Coetzee had been reading each other's books for years, the two writers did not meet until February 2008. Not long after, Auster received a letter from Coetzee, suggesting they begin exchanging letters on a regular basis and, 'God willing, strike sparks off each other'.

Here and Now is the result of that proposal: an epistolary dialogue between two great writers who became great friends. Over three years their letters touched on nearly every subject, from sports to fatherhood, literature to film, philosophy to politics, from the financial crisis to art, eroticism, marriage, friendship, and love.
More books by this author

Paul Auster is the best-selling author of The New York Trilogy ,Invisible, Moon Palace, The Brooklyn Follies, among many other works. In 2006 he was awarded the Prince of Asturias Prize for Literature and inducted into the American Academy of Arts and Letters. Among his other honours are the Independent Spirit Award for the screenplay of Smoke and the Prix Medicis Etranger for Leviathan. He has also been short-listed for both the International IMPAC Dublin Literary Award (The Book of Illusions) and the PEN/Faulkner Award for Fiction (The Music of Chance). His work has been translated into more than thirty languages. He lives in Brooklyn, New York.