Not a blue-stocking lady 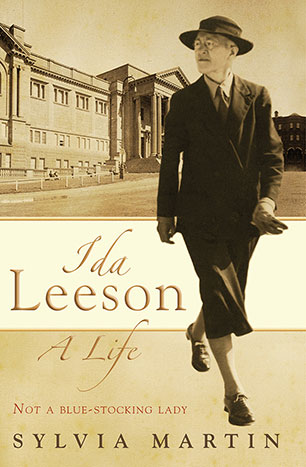 Ida Leeson was no ordinary librarian. At a time when only men rose to such positions in the Australian library world, she won an epic struggle to become Mitchell Librarian - a position previously held only by men.

Ida Leeson was no ordinary librarian.

The first woman to be appointed Mitchell Librarian, in 1932, after a very public controversy over whether it was appropriate to appoint a woman to such a senior position, Ida Leeson was a girl from a working class background who successfully penetrated the bourgeoisie to become a woman of achievement in what was still predominantly a man's world.

A diminutive, forceful and vibrant woman, Ida resists any easy classification. In what we now acknowledge to be a heroic period of Australian writing and publishing, Ida became a trailblazer for women, for librarians, and a champion of the lively literary culture of Australia in the 1930s and 1940s. She was friendly with many of the leading literary figures of the time, such as James McAuley, Christopher Brennan, Marjorie Barnard, Flora Eldershaw and most notably Miles Franklin, for whom she was a kind of honorary proof-reader and literary advisor. She was also a close friend of Walter Burley Griffin and Marion Mahony Griffin, and for some time both Ida and her partner, Florence Birch, lived as part of the bohemian enclave the Griffins established around them at Castlecrag.

Brought to vivid life by Sylvia Martin, here is the story of a woman to inspire a new generation of readers - hers was a truly remarkable life in an intriguing era.
More books by this author

Dr Sylvia Martin is an academic attached to the University of New England who has previously published Passionate Friends: Mary Fullerton, Mabel Singleton, Miles Franklin, published by Onlywomen Press. It was short-listed for the 2002 ISAA (Independent Scholars Association of Australia) Book Prize, where the judges wrote: Sylvia Martin reveals herself as not just a researcher or biographer, but a storyteller of the highest order'.

Part 1: Towards the Mitchell Librarianship

Chapter 1: Not a blue-stocking lady

Part 2: Outside the Mitchell

Chapter 7: Castlecrag and the Griffins

Chapter 11: From depression to war

Part 4: Beyond the Mitchell

Chapter 13: A researcher to the end